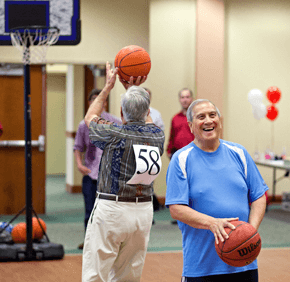 Bob Gralley is a runner. But that didn’t stop the quick-witted and sprightly 86-year-old from taking part in a March Madness basketball tournament at Oak Crest Retirement Community in Parkville March 21.

The competition blended generations, with participants coming from the Institute of Notre Dame in Baltimore and Calvert Hall College High School in Towson. As students and seniors alike competed, they also raised money for Stop Hunger Now, and international hunger relief organization.

“It’s a great health and wellness activity,” said Jeff Getek, public affairs manager for Oak Crest, as he watched residents practice their shooting skills on the court as students clapped and cheered.

Gralley, donned in a University of Maryland sweatshirt, has run in 42 marathons and has kept track of every mile he has ever run. At 52,000 miles and counting (he runs 20 miles a week and Baltimore’s half-marathon each year), he is in shape for sure, but crinkled his nose at his free-throw basketball performance.

“Today I didn’t do so well,” said Gralley, who did play for half a year for the University of Maryland’s basketball team in 1944 before going off to war.

Throughout the event, seniors mingled and chatted with the young people.

Cierra Chandler, a 14-year-old freshman from IND, said “It’s nice to get the youth involved with the elderly.”

She volunteers with the elderly every Tuesday at her school through a program called PAL (Preserving and learning), which unites seniors and students through crocheting, technology classes and more.

“I thought this event was nice,” she said of the free-throw competition. “I like seeing how they’re not shy.”

Sabriaya Shipley, 16, serves as the secretary for PAL.

“Our new generation is so into this new world, some of us still want to hold back and learn about the past and how things were,” said the IND student.

Shipley’s grandmother died when Shipley was 7, so she said she has been able to talk to seniors and “get the perspective of what really is important and what really matters.”

“I think this is really fun and it’s great to hear their stories,” said 16-year-old St. Ignatius parishioner Justin Baker, who is a junior at Calvert Hall.

His classmate Jimmy Grem, also 16 and a parishioner of Church of the Nativity in Timonium, said he liked being able to engage in an activity with the seniors and said their athletic skills were impressive.

Marc Parisi, coordinator of campus ministry for Calvert Hall, said his purpose for bringing students to the event was two-fold.

“It’s good to see the students in a different light – out having fun and chatting with the residents,” he said. “It’s good for us to see that side of them. I forget people have different mentalities about what young people are like. It’s good to see the residents having a good time with our kids and recognizing how the kids care about them. It’s a good thing for us and for the community.”

Meanwhile, Gralley, who also bikes with his son every Saturday, said “anything with activity is good for us older folk.”

“We’re very fortunate here that we have a wonderful health club,” he said.

Watch a slideshow of the March 21 event: