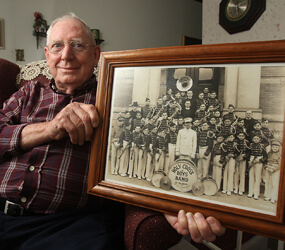 Norman Beard lost contact with music after he enlisted in the Army, but he still refers to his days in the Holy Cross Boys Band of South Baltimore as some of the best years of his early life.

When the band formed in 1933, Mr. Beard was a fifth-grader interested in music, but “no one knew how to play,” he said.

A faculty member he recalled as “Mr. Wilder” was hired to teach all the instruments, such as clarinet, trombone, saxophone, tuba and bass drum; he led the school band for six years until it was disbanded in 1939. The late Father Casimir Keydash was the band’s spiritual leader, said Mr. Beard.

His older brother, the late Melvin Beard, also played in the marching band that formed at the request of the pastor, the late Monsignor Leo L. Otterbein. It played at school affairs and marched in parade formation throughout the South Baltimore neighborhood, sometimes across the Hanover Street Bridge to lead baseball players to Swan Park and its sandlot field for the start of the baseball season, according to Mr. Beard.

“There were plenty of practices,” said Mr. Beard, who lived a half-block away and was an altar server in the parish.

“We had to learn the arias from various operas,” he said of the music, “and the Sousa 1-2 march … and once a month we had a marching rehearsal where the group marched while they played instruments in the tremendous school hall.”

The 86-year-old parishioner of St. Philip Neri, Linthicum Heights, shared with The Catholic Review a large, framed, black-and-white photo of the band posed on the school’s steps on West Street – the only item he owned from the experience besides his memory of playing the baritone horn. Holy Cross School closed in 1972.

He didn’t remember how the lone female drum majorette came to be a band member, because after he graduated from eighth-grade and the school began to lose other boys to various high schools, Mr. Wilder wanted to recruit female members. The boys rebelled, Mr. Beard said, “so the band disintegrated.”

As the senior studied the photo yet once again, he wondered aloud if any of his former band mates are still living. If so, Mr. Beard invites them to contact him by e-mail at normanbeard@msn.com.