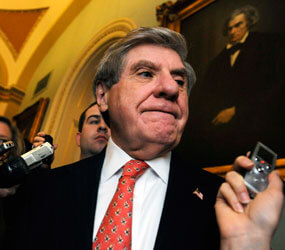 WASHINGTON – The U.S. Senate’s rejection of a bipartisan abortion amendment to its version of health care reform legislation was “a grave mistake and a serious blow to genuine health reform,” according to the president of the U.S. Conference of Catholic Bishops.

Cardinal George said he remained “hopeful that the protections overwhelmingly passed by the House will be incorporated into needed reform legislation.”

“Failure to exclude abortion funding will turn allies into adversaries and require us and others to oppose this bill because it abandons both principle and precedent,” he added.

Bishop Murphy said both houses of Congress need “to retain existing abortion funding restrictions and safeguard conscience protections because the nation urgently needs health care reform that protects the life, dignity, conscience and health of all.”

“We hope the Senate will address the legislation’s fundamental flaw on abortion and remedy its serious problems related to conscience rights, affordability and treatment of immigrants,” he added.

“Even our opponents claim they do not support federal funding for elective abortions and they want current restrictions to apply,” he said. “The way to settle this often misleading debate is simply, clearly and explicitly to apply Hyde restrictions to all the federal funds in this legislation.”

The Hyde amendment, first approved in 1976, prohibits federal funding of abortions except in cases of rape, incest or threat to the mother’s life.

Bishop Wester said health reform “must respect, not threaten, human life and dignity” and “respect, not violate, consciences of providers, taxpayers and others.”

In a Dec. 7 letter to senators, the three committee chairmen had thrown their support behind the Nelson-Hatch-Casey amendment, saying it would “keep in place the long-standing and widely supported federal policy against government funding of health coverage that includes elective abortions” and was similar to one approved by the House in November before passage of its Affordable Health Care For America Act.

“Like that amendment, it does not change the current situation in our country: Abortion is legal and available, but no federal dollars can be used to pay for elective abortions or plans that include elective abortions,” the bishops said.

“This amendment does not restrict abortion, or prevent people from buying insurance covering abortion with their own funds,” they added. “It simply ensures that where federal funds are involved, people are not required to pay for other people’s abortions.”

Along with their letter, the three chairmen sent each senator copies of two fact sheets – one on abortion and conscience problems in the Senate health reform bill and the other detailing what the Senate amendment would do.

During the Senate debate, several senators read from the fact sheets or the USCCB letter to support their arguments in favor of the amendment.

“Sadly, the current Senate bill fails to keep in place the long-standing federal policy against the use of federal funds for elective abortions or health plans that include elective abortions,” the letter said. “We believe legislation that violates this moral policy is not true health care reform and must be amended to reflect the Hyde restrictions. If that fails, the current legislation should be opposed.”

In the end, the vote was not on the Nelson-Hatch-Casey amendment itself but on a motion to table the amendment from Sen. Barbara Boxer, D-Calif.

In addition to Casey and Nelson, five other Democrats – Sens. Edward E. Kaufman of Delaware, Kent Conrad and Byron Dorgan of North Dakota, Mark Pryor of Arkansas and Evan Bayh of Indiana – joined all but two Republicans in opposing the tabling of the amendment. Sens. Susan Collins and Olympia Snowe, both Republicans from Maine, supported the Boxer motion to table.

Senate Majority Leader Harry Reid of Nevada, who has said he opposes abortion, voted to table the Nelson amendment, saying, “This is a health care bill, not an abortion bill. We can’t afford to miss the big picture.”