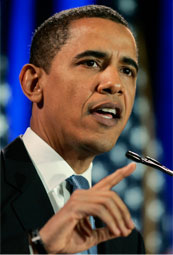 WASHINGTON – Sen. Barack Obama’s speech on race March 18 at Philadelphia’s National Constitution Center may or may not significantly affect his prospects for being elected president in November, but either way it charted a new course for how race can be discussed in the United States.

“This has given us an alternative way to deal with racial conflict in the public discourse,” said Precious Blood Father Clarence Williams, who is senior director of racial equality and diversity initiatives for Catholic Charities USA.

Political analysts debated whether Sen. Obama’s speech will prove effective at overcoming criticism of the Illinois Democrat’s ties to the Rev. Jeremiah Wright, former pastor of Trinity United Church of Christ in Chicago, over some of the minister’s more sensational comments, particularly about race and government.

Father Williams looked at Sen. Obama’s speech not in political terms, but as “a model for what to do with racial conflict.” He likened conflict about race in the United States to a chronic illness “that surfaces again and again. It might be in remission at times, but it’s always going to return.”

Like a relative who’s chronically ill or a family member who behaves in ways that are inappropriate or embarrassing, racial conflict as a factor in society can’t simply be written off, Father Williams said in an interview with Catholic News Service. “But we can change the way we react to it and talk about it.”

The controversy for Sen. Obama over Rev. Wright arose as excerpts of some of the minister’s sermons have been broadcast and reported widely. Among those cited have been Rev. Wright’s suggestion that the government created HIV as a form of genocide against blacks and that U.S. acts abroad were the root cause of the 2001 terrorist attacks.

Dogged by demands that he denounce his longtime friend and pastor, Sen. Obama took on those calls, as well as the complex role racial identity has played for him and society, in a speech that condemned Rev. Wright’s remarks but also defended the man who “has been like family to me.”

“He strengthened my faith, officiated my wedding and baptized my children,” Sen. Obama said. “Not once in my conversations with him have I heard him talk about any ethnic group in derogatory terms, or treat whites with whom he interacted with anything but courtesy and respect. He contains within him the contradictions – the good and the bad – of the community that he has served diligently for so many years.

Father Williams said Sen. Obama’s speech fit right in with what Catholic Charities said in a paper, “Poverty and Racism: Overlapping Threats to the Common Good,” that the organization released in January.

“History shows that the Catholic Church has not been immune from the racial virus that afflicts American culture,” it said, citing a 1992 U.S. bishops’ statement, “A Time for Remembering, Reconciling and Recommitting Ourselves as a People.”

The earlier document acknowledged “the church’s tragic complicity in racism,” evidenced by its justification of slavery, the refusal to admit nonwhites to seminaries, convents and religious life, and its silence about segregation, hostility and violence.

“Acknowledging this sad legacy of racial complicity is painful,” said the January paper.

It defines racism as a persistent and destructive evil that “is much more complex than the typical understanding acknowledges.” It connects racism and the perpetuation of poverty for parts of American society and outlines a range of public policy proposals intended to address poverty that is “racially caused or aggravated.”

Father Williams said Sen. Obama’s speech provides a template for people at all levels of public or nonpublic life to talk more openly about race and what it means. “He’s given us a model for how to do it without disowning the people in our lives,” the priest said.

Although commentators who focused on the strictly political implications of Sen. Obama’s speech criticized him for not distancing himself more dramatically from Rev. Wright, Father Williams said it’s perhaps more helpful for society that he didn’t do so.

He said he thought the speech recognized that “we all have the capacity for both greatness and weakness – and religious leaders are not exempt.”

“It’s like the social convention of apologizing for slavery,” Father Williams said. “Once that’s been done, it’s easier for others to do that.”

When Catholic Charities released its paper on racism and poverty in observance of the Rev. Martin Luther King’s birthday this year, “we said we want to begin the conversation that we’re not having as a nation,” he said. “His talking about it helps the conversation get started.”