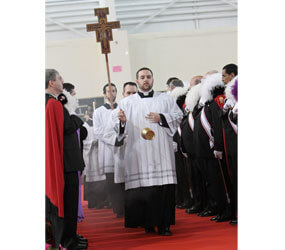 WASHINGTON – Most of them weren’t born yet when the events occurred that came to define the U.S. crisis of sexual abuse by priests. But for men who entered the seminary in the past decade, a point of commonality seems to be that they want to prove that priests are good people.

A decade after the U.S. Catholic Church scandal about clergy sex abuse exploded in the news, several seminaries contacted by Catholic News Service reported the same motivation among the men who have entered the schools in the past decade: “They all said they want to be part of the solution,” as Father Thomas Baima, vice president and provost at Mundelein Seminary in Illinois put it.

Seminaries have adapted their admissions process and their curriculum somewhat to reflect an increased emphasis on understanding the role and demands of celibacy and on what is called “human development” in academia. But the common theme voiced by seminary administrators asked about what has changed was that applicants say they want to counteract the negative image of the priesthood that the abuse scandal created.

“More often than not they say they come because they want to prove that there are good priests,” said R. Scott Woodward, dean at the Oblate School of Theology in San Antonio. “They want people to know that religious life, the priesthood, are still valuable. They feel that’s a part of their mission.”

Father Peter Drilling, rector of Christ the King Seminary in East Aurora, N.Y., said he also has noticed a marked change in attitudes in the 25 years he has been associated with the seminary. More recent applicants are much more aware of and willing to discuss the problems behind the abuse scandal.

“Just yesterday,” he said, one of the five men interviewed as part of the admission process said “one reason he wanted to pursue the priesthood is that he has had good experiences with priests and he wants to show that priests are good and that priests are part of the solution.”

All three administrators said their seminaries didn’t add material to the curriculum related to celibacy and appropriate behavior so much as they began emphasizing it more, and in more parts of the course of studies.

In a “causes and context” report on sexual abuse released by the U.S. Conference of Catholic Bishops in May, the section on seminaries described a slow evolution in the emphasis on chaste celibacy in the curriculum at seminaries.

The report: “The Causes and Context of Sexual Abuse of Minors by Catholic Priests in the United States, 1950-2010,” was conducted by a team of researchers at the John Jay College of Criminal Justice of the City University of New York and commissioned by the National Review Board, a lay consultative body created in 2002 under the bishops’ “Charter for the Protection of Children and Young People.”

It said that in the five editions of the “Program of Priestly Formation” published between 1971 and 2005, the section devoted to formation for chaste celibacy grew from “four relatively brief paragraphs on celibacy,” in the first edition to a few more paragraphs in 1976 and up to 11 paragraphs in the third edition. It noted substantial changes in the 1992 fourth edition, but still described the depth in terms of paragraphs, 33 in this case. Though it also described “a clear delineation of behavioral expectations appropriate to a life of celibacy.”

By the fifth edition in 2005, the publication noted, the program greatly expanded the topic of celibacy and the integration of “human formation” into all other aspects of formation. It was described as discussing “in clear terms sexuality and the expectations for education and behavior relative to the concerns surrounding children.”

“High standards and vigilance are urged pertaining to sexuality, affective maturity and capacity to live celibate chastity,” the report found. It also commented on expanded norms for admission, with reference to “psychosexual development, capacity to live a celibate life and a minimum of two years of continent living before entry.”

Franciscan Sister Katarina Schuth, a professor of religion at the University of St. Thomas in St. Paul, Minn., and an expert on seminary education who consulted on the John Jay study, told Catholic News Service that the early and mid-1990s was when seminaries first started putting more emphasis on healthy development of relationships and on the role of celibacy.

Human development instruction also focuses on the role of self-respect.

“Self-respect translates into respect for others,” she said.

Like the seminary administrators, Sister Katarina said the subjects of celibacy and appropriate behavior have long been addressed in seminaries but perhaps without the understanding of the psychology of those topics and appropriate education about how they affect one.

“You won’t avoid problems with humanity simply by prayer,” she said. “There’s nothing wrong with pious practices, but pious practices can’t make up for not understanding how to behave.”

By the time an applicant gets to a seminary these days, he’s already been thoroughly vetted by the diocese or religious order which he hopes to join. All three administrators said recent seminary students have had background checks and more psychological screening than previous generations ever received. The students are also more open to discuss topics such as sexuality, celibacy and appropriate relationships, they said.

Underwood said that 20 years ago, “you would mention the word ‘celibacy’ and everyone froze. It was like you took all the air out of the room.” Even 15 years ago, said Underwood, “it was as if they had never heard the word, as if it had not been mentioned as a part of the job description, even though we know it had been.”

Father Drilling said at Christ the King, which is now the seminary of the Diocese of Buffalo, N.Y. (it was administered by the Franciscans’ Holy Name Province until 1990), all seminarians receive the Virtus training about sex abuse. That includes receiving and responding to monthly updates, just as do all the priests of the Buffalo Diocese.

Father Baima, who has been at Mundelein for 11 years, said that as the abuse scandal exploded a decade ago, “the worry was that it would destroy vocations. We’ve found the opposite.”

Not only do the men who come emphasize that they want to be a part of the solution, “it’s a theme that cuts across all types of students,” no matter whether they’re young or older.

“They say, ‘We want to serve the church and we want the church to be proud of us,’ ” he said.