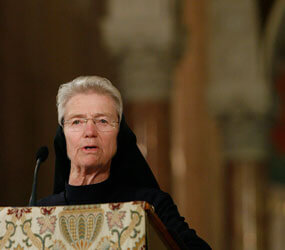 WASHINGTON – A coalition of U.S. women religious representing more than 100 communities said March 17 that the position on health care reform and abortion articulated by the U.S. bishops is “the authentic teaching of the Catholic Church” and should be followed.

The statement by Mercy Mother Mary Quentin Sheridan, president of the Council of Major Superiors of Women Religious, came a day after the leaders of more than four dozen U.S. congregations of women religious urged members of Congress to “cast a life-affirming ‘yes’ vote” on the Senate’s version of health reform legislation.

“Despite false claims to the contrary, the Senate bill will not provide taxpayer funding for elective abortions,” they said in a letter delivered to all members of Congress March 17. “It will uphold long-standing conscience protections and it will make historic new investments – $250 million – in support of pregnant women.”

Mother Mary Quentin noted that Cardinal Francis E. George of Chicago, president of the U.S. Conference of Catholic Bishops, has opposed the Senate version of health care legislation “because of its expansion of abortion funding and its lack of adequate provision for conscience protection.”

“Protection of life and freedom of conscience are central to morally responsible judgment,” she said. “We join the bishops in seeking ethically sound legislation.”

The Council of Major Superiors of Women Religious represents 103 communities. It was formed in 1992 by Vatican decree in response to a request from a group of women superiors belonging mainly to communities that are not part of the Leadership Conference of Women Religious, whose president was among the signers of the letter urging passage of the Senate health reform bill.

The letter urging passage of the bill claimed its signers represented 59,000 women religious, roughly the total number in the United States. But the major superiors’ council represents more than 10,000 nuns, and LCWR, founded in 1956, says on its Web site that it represents about 90 percent of the nation’s nuns.

The U.S. bishops have consistently opposed the Senate health care bill, saying it would expand federal funding of abortions. Cardinal George said March 15 that the bishops were “not quibbling over technicalities” and that the bill deliberately omitted “the necessary language that could have taken this moral question off the table.”

An analysis posted March 17 on the USCCB Web site said that the Senate bill “itself contains no relevant provision to prevent the direct use of federal funds for elective abortions.” The bill also authorizes a new fund for community health centers that the analysis said will not be covered by the Hyde amendment, which has banned federal funding of abortion since 1975.

In their letter, released through the Catholic social justice lobby Network, the nuns whose congregations are part of LCWR ties said theirs “is the real pro-life stance, and we as Catholics are all for” the health bill.

Signers of the letter include the superiors or leadership teams of: the Sisters, Servants of the Immaculate Heart of Mary; Adrian Dominican Sisters; Franciscan Sisters of Perpetual Adoration; Sisters of Mercy of the Americas; Sisters of the Holy Family; Sisters of St. Joseph of the Third Order of St. Francis; Society of the Holy Child Jesus; and dozens of other religious orders.

“We have witnessed firsthand the impact of our national health care crisis, particularly its impact on women, children and people who are poor,” it said. “We see the toll on families who have delayed seeking care due to a lack of health insurance coverage or lack of funds with which to pay high deductibles and co-pays. We have counseled and prayed with men, women and children who have been denied health care coverage by insurance companies.”

The women religious said they joined with the Catholic Health Association, “which represents 1,200 Catholic sponsors, systems, facilities and related organizations, in saying: The time is now for health reform and the Senate bill is a good way forward.”

Cardinal George said changes must be made in the Senate-passed health bill’s abortion language before the House considers it, while Sister Carol Keehan, a Daughter of Charity who is CHA president and CEO, said changes can be made later if needed.

Although they called the Senate bill “an imperfect measure,” the women religious who signed the Network letter said it would “expand coverage to over 30 million uninsured Americans” and “is a crucial next step in realizing health care for all.”

They pledged to hold prayer vigils for health care reform nationwide and said members of their communities would be asked to contact members of Congress to urge passage of the Senate bill.

“For us, this health care reform is a faith mandate for life and dignity of all of our people,” they said.

Archbishop Charles J. Chaput and Auxiliary Bishop James D. Conley of Denver said in a joint statement March 17 that “groups like Network and the Catholic Health Association have done a grave disservice to the American Catholic community by undermining the leadership of the nation’s Catholic bishops, sowing confusion among faithful Catholics and misleading legislators through their support of the Senate bill.”

“Do not be fooled,” they added. “Nothing has changed. The Senate bill remains gravely flawed on the issues of abortion funding, conscience protections and the inclusion of immigrants. Unless seriously revised to address these issues, the Senate version of health care is unethical and should be firmly opposed.”

Retired Bishop John E. McCarthy of Austin, Texas, told The Associated Press that despite his opposition to abortion he supported passage of the Senate health reform bill.

He said members of Congress could improve on the legislation later, “but let’s not kill it at this crucial moment.”