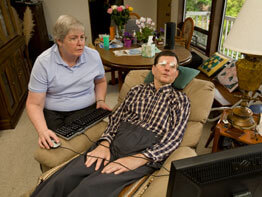 SEATTLE – John Peyton doesn’t have long to live. Earlier this summer, his doctor gave him three to six months.

The 64-year-old retired computer programmer has an unusually aggressive form of amyotrophic lateral sclerosis, or ALS, commonly known as Lou Gehrig’s disease. In the months since last November when he first had trouble lifting a hammer over his head, he has gone from healthy and active to completely paralyzed, struggling to breathe with a ventilator.

The disease has made him totally dependent on his wife of 40 years, Patricia. She dresses him, feeds him, even shifts his body in the living room recliner where he now spends his days.

Mr. Peyton’s once-strong voice is fading fast; soon it will go altogether. But while he still has it, Mr. Peyton is using it to proclaim the intrinsic value and sanctity of every human life at every stage, in every condition. He has spent his final months opposing Initiative 1000, called the Death With Dignity Act, which will be on the Nov. 4 ballot in Washington state. If passed, it would legalize physician-assisted suicide.

“This Initiative 1000 is just the first step in putting into law the lie that there is such a thing as a life not worth living,” he said.

Mr. Peyton is a veteran of the pro-life cause, tracing his involvement to the early 1970s when Washington state legalized abortion before Roe v. Wade made it to the U.S. Supreme Court. The issue spurred the Peytons, then living in Ohio, to get involved with Birthright International, an organization that aids women in crisis pregnancies.

Through Birthright, the Peyton family welcomed several expectant mothers into their home.

When the family returned to Washington in 1977, Mr. Peyton joined the speakers bureau of Human Life of Washington and began giving talks on pro-life issues at schools, churches and club meetings. He also served as the state pro-life chairman for the Knights of Columbus when, in 1991, Washington’s first assisted-suicide ballot measure was defeated.

Mr. Peyton acknowledged that he is “exceedingly fortunate” to have the loving support of his wife, his six grown daughters and their families, his friends and neighbors and his home parish, St. Paul in Seattle. But what about those suffering with terminal illnesses who are not so fortunate? Rather than tempting them to commit suicide, Mr. Peyton would rather see society extend true compassion to the dying.

“So much can be done to help people who are helpless,” he told The Catholic Northwest Progress, Seattle’s archdiocesan newspaper. “We could, as a society, be far more compassionate.”

The Peytons have been able to deal with John’s impending death largely because of their Catholic faith, but it does not mean they have not had their share of tears in recent months.

“Well, I’m disappointed, there’s no denying that,” said Mr. Peyton, who had hoped to have many years to enjoy retirement with his wife. “But I don’t feel any anger or bitterness. I don’t feel cheated of anything.

So, after more than 30 years of speaking about life issues, Mr. Peyton’s voice is giving out. He is prepared to leave this life with trust in God’s mercy, though he will leave behind much unfinished work.

“I’ve just about said the last pro-life thing that I’m going to be able to say,” he gasped at the end of a long interview. A single tear ran down his cheek, but his eyes burned with urgency and intensity. “It’s up to you guys now. Take it up. May God go with you.”