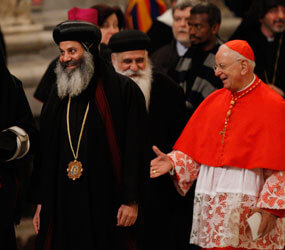 ROME – Giving in to the temptation of thinking the Christian churches will never be fully united is a sign of weak faith, Pope Benedict XVI said.

“One must resist the temptation of resignation and pessimism, which is a lack of trust in the power of the Holy Spirit,” the pope said Jan. 25 at an ecumenical evening prayer service marking the close of the Week of Prayer for Christian Unity.

The pope presided over the service at Rome’s Basilica of St. Paul Outside the Walls with a German Lutheran delegation, an international group of Oriental Orthodox bishops and theologians and Orthodox, Anglican and Protestant leaders from Rome.

Special prayers were read by Orthodox Metropolitan Gennadios of Italy and Malta and by the Rev. David Richardson, the Anglican archbishop of Canterbury’s representative to the Vatican and director of the Anglican Center in Rome.

In his homily, the pope said the search for Christian unity is “a moral imperative, a response to a precise call of the Lord.”

The theme of the 2011 week of prayer, “One in the apostles’ teaching, fellowship, breaking of bread and prayer,” described the unity experienced within the early Christian community, the pope said.

The early Christian community in Jerusalem “was not closed in on itself, but from its birth it was catholic, universal, capable of embracing people of different languages and cultures,” the pope said.

“It was a community not founded on a pact among its members, or on the simple sharing of a project or ideal, but on profound communion with God,” he said.

Pope Benedict repeated what he had said Jan. 19 during his weekly general audience at the Vatican: The theme’s four ingredients are the four pillars of Christian faith and are “the fundamental dimensions of unity of the visible body of the church.”

To be fully united, he said, Christians must hold firm to the faith taught by the apostles, they must gather together, they must share the Eucharist, and they must pray constantly.

Because unity must be based on faith believed and lived in common, he said at the prayer service, Christian unity cannot be reduced to a recognition and acceptance of differences and an agreement to coexist peacefully.

“That for which we yearn is the unity for which Christ himself prayed and which, by its nature, is manifested in a communion of faith, sacraments and ministry,” Pope Benedict said.