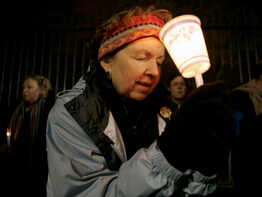 WASHINGTON – Scripture readings were interspersed with testimonies from a U.S. soldier, Iraqis and the mother of a slain National Guard sergeant at a crowded prayer vigil March 16 that kicked off weekend anti-war protests in Washington and around the country.

With nearly 3,000 people packed into the Episcopal Church’s National Cathedral and hundreds more in overflow space at other churches, Catholic, Methodist, Episcopalian, Lutheran, Baptist, Mennonite, Presbyterian, United Church of Christ, Quaker and Seventh-day Adventist leaders set the stage for a late-night march to the White House in bitter cold wind and snow.

After walking just under four miles to the White House from the cathedral, participants carrying battery-operated candles prayed for peace. Dozens who refused police orders to keep moving were arrested in planned acts of nonviolent resistance. The next day, thousands of protesters gathered near the Lincoln Memorial and marched to the Pentagon for an anti-war rally.
At the National Cathedral, the focus of several “witness” reflections, as the program described them, was on the moral grounds for opposing the war.

“We are here tonight in this church because each one of us is a witness to this war and our complicity in it,” said Celeste Zappala, whose son, National Guard Sgt. Sherwood Baker, was killed in Iraq. “Though I know nothing I say can bring my son back to me, we lay this grief before the Lord.”

The Rev. Raphael G. Warnock, senior pastor of Ebenezer Baptist Church in Memphis, Tenn., said that “the real danger confronting America is not that we may lose the war. The real danger is America may lose its soul.”

A reading from the Gospel of Matthew about the arrest and crucifixion of Jesus, another from St. Paul’s First Letter to the Thessalonians about the path out of darkness, and a hymn based on the peace-themed Prayer of St. Francis provided the background for the remarks of other participants in the program.

The Rev. Bernice Powell Jackson, North American director for the World Council of Churches, said St. Paul’s letter is a reminder that “hope, for Christians, is the understanding that with God all things are possible.”
But war, she said, is the epitome of the absence of hope.

“Hope for Christians is inextricably linked to God,” said Rev. Jackson. “Hope for Christians can never be just a word, it must be an action,” such as providing public witness to the idea that there are nonviolent ways to overcome hate, war and death, she said.

The war in Iraq has become “a matter of faith” for many people, Rev. Wallis said.

“By our deepest convictions about Christian standards and teaching, the war in Iraq was not just a well-intended mistake or only mismanaged,” he continued. “This war, from a Christian point of view, is morally wrong – and was from the very start. It cannot be justified with either the teaching of Jesus or the criteria of St. Augustine’s (definition of) just war.”

The prayer service, part of Christian Peace Witness for Iraq, was organized as a collaboration of dozens of religious and activist groups.

Donna Grimes, a national council member of Pax Christi USA, Franciscan Father Joe Nangle, director of Franciscan Mission Service, and Monsignor Barry Knestout, secretary for pastoral ministry and social concerns for the Archdiocese of Washington, represented Catholic organizations in processions leading into and out of the service.

In remarks March 19 marking the anniversary of the war’s start, Bush did not directly address the national sentiment about the war, but talked about some of the concerns raised by opponents of the war.

“It could be tempting to look at the challenges in Iraq and conclude our best option is to pack up and go home,” Bush said in a statement at the White House. “That may be satisfying in the short run, but I believe the consequences for American security would be devastating.

“If American forces were to step back from Baghdad before it is more secure, a contagion of violence could spill out across the entire country,” he said. “In time, this violence could engulf the region.”