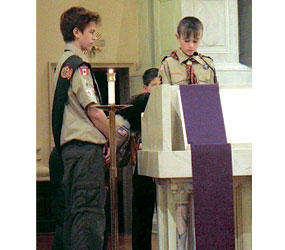 FREDERICK – John Davis of St. Mary of the Assumption Parish in Govans prays in an unconventional way.

Davis was one of four adults receiving the St. George Award, recognizing leaders who promote Catholic values through scouting, at the Archdiocese of Baltimore’s annual Scout Mass March 7 at St. John the Evangelist in Frederick.

Approximately 300 Scouts and family members attended the Mass, which was celebrated by Bishop Mitchell T. Rozanski.

The archdiocese once again was presented with an award from the National Catholic Committee on Scouting. Nearly 5,000 in the archdiocese are enrolled in Catholic Scout units, the focus of that committee.

Bishop Rozanski referenced the first reading, Exodus 3:1, the story of Moses being called by God.

“Centuries ago Moses heard the voice of God, and not only was his life changed and transformed but his people were changed forever,” Bishop Rozanski said. “Centuries later, God’s voice still comes to us. We pray that through the program of Scouting, that many who participate may be changed so our world will be transformed by the ideals of all who are proud to be called Scouts.”

As is tradition, members of the Cub Pack, Boy Scout and Girl Scout troops from the host parish, St. John the Evangelist, served roles at Mass and received personal recognition.

Organizer Amy Spessard, a St. John the Evangelist parishioner and member of the archdiocesan Committee on Scouting, arranged for patches that feature St. John’s steeple, considered a symbol of Scouting in Western Maryland. The church dates to 1837.

Archdiocesan Scouts from 107 troops earned a total of 494 religious emblems that were blessed at the Mass.

“We always have our own Scout Mass here,” said Monsignor Richard J. Murphy, pastor of St. John the Evangelist, “but with it being the 100th anniversary, and all the Scouts from all over, and having Bishop Rozanski here, it makes it very special.”

Jake Sabatano, 16, served as an extraordinary minister of holy Communion. He said that Scouting and his faith journey at St. John’s Regional School have shaped his growth.

“I was very eager to be an altar server, and a Eucharistic minister seemed a natural next step,” he said of his service journey within his parish. “St. John’s is my home, and scouting is about service. I serve in my church.”