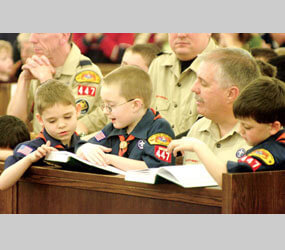 Sarah Jordan is the youngest member of the pastoral council at St. Brigid in Canton.

She teaches Sunday school there and serves as an extraordinary minister of Holy Communion, all while earning an associate’s degree while aiming for a career in veterinary medicine.

Ms. Jordan, 21, has long been committed to the community, her church and the Scouting movement, a combination that made her an ideal candidate to be the first recipient of the Venturing Trust Award in the Archdiocese of Baltimore.

A co-ed development program of the Boy Scouts of America, Venturing – and Ms. Jordan – added to the scope of the annual Archdiocesan Scout Mass March 1 at St. Philip Neri in Linthicum Heights.

The recipients of emblems signifying religious development included more than 550 individuals from 73 units and nearly as many parishes in the archdiocese.

They ranged in age from Girl Scout Brownies in the second grade to countless Eagle Scouts, among them Cardinal William H. Keeler, retired archbishop of Baltimore who was three days shy of his 78th birthday, and Monsignor Thomas L. Phillips, the chaplain for Scouting in the archdiocese.

“This is the one day when we bring the concept of Catholic Scouting into focus,” Monsignor Phillips said.

In lieu of having every honoree recognized individually at the Archdiocesan Scout Mass, members of the host troop are singled out. With the support of Father Dale Picarella, pastor of St. Philip Neri, Troop 447 provides direction for more than three dozen boys.

“We’ve got 39 kids and 35 adults on the books as volunteers,” assistant Scoutmaster Bill Flavin said in the parish hall named for Monsignor Francis X. Zorbach, pastor emeritus. “We began preparing for today a year ago, after last year’s Mass.”

Mr. Flavin has two sons in Troop 447. Jake, 15, earned the Pope Pius XII Emblem for involvement in Catholic Scouting’s church-related ministries and vocation program. Nicholas, 12, a seventh-grader at St. Philip Neri School, was one of 14 members of Troop 447 to receive the Ad Altare Dei Emblem, which helps boys develop in the faith community using chapters based on the seven sacraments.

Troop 447 attends summer camp in western Pennsylvania. James Hall is a resident of that state, but he and his wife, Kathy, are parishioners of St. Ann in Hagerstown, thanks in part to the religious education it provides their sons, James, 18, and Vincent, 17.

Mr. Hall and his sons are all Eagle Scouts, and he received the St. George Adult Recognition Award. Mr. Hall gave 28 years to the U.S. Marine Corps, a career that included being made a lay minister on board the U.S.S. Fort Fisher in 1997, when it entered the Persian Gulf without a Catholic chaplain.

In addition to Cardinal Keeler, Monsignor Phillips and Father Picarella, the concelebrants included Monsignor John B. Brady, the Region 4 chaplain for the National Catholic Committee on Scouting; St. Philip Neri Deacons Robert L. Keeley and David Tengwall; and Deacon Charles Hiebler, who, in addition to being the assistant to the Seton vicar, has been active in Scouting leadership since the 1960s.

Troop 1811, based at St. Joseph on Carrollton Manor in Buckeystown, received a National Gold Medallion Award, which is given to units that excel at providing youth with quality programs involving religious activities.

St. Ursula gave Ms. Jordan, the Venturing Trust Award winner, her start as a Brownie when she was 7. When she outgrew the Girl Scouts, that parish gave her an outlet in its Venturing program, designed for young men and women ages 14 to 20.

Asked to detail the accomplishments that earned her the Venturing Trust Award, Ms. Jordan shared a print-out that listed 16 items in five categories. Along the way, she’s discussed freedom of religion with Ron Herning, her Scout advisor, and raised funds for a pregnancy center that’s backed by St. Brigid.