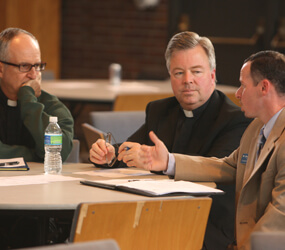 Parish and school leaders were told Oct. 27 and 28 by Monsignor Robert L. Hartnett that the Archdiocese of Baltimore would be announcing school consolidations in March 2010.

Those mergers will be effective at the start of the 2010-2011 school year. The total number of schools affected was not announced.

Archbishop Edwin F. O’Brien hosted the two days of consultations with parish and school administrators at St. John the Evangelist in Columbia.

In February, the archbishop formed a blue ribbon committee of education, business and civic leaders to develop a strategic plan for the future of schools. They have met six times and will meet again twice during the first two weeks of November.

“I know of no experience in my life where consultation has been more broad, as deep and thorough as has gone on for the last six or seven months,” Archbishop O’Brien said during the consultations. “I share your anxiety. You think you’re anxious? I’m anxious too, because there are going to be some tough decisions if you read my column (in The Catholic Review).”

The committee will deliver a first draft of a plan for schools in January 2010 and will continue revising through the spring of 2010. The archbishop will announce the plan June 20, 2010.

He has reiterated several times this year that he wants as many children to attend Catholic schools as possible.

“Any school I go into, it would just tear my heart out to think of any one of those children I would have to turn away next year from a Catholic education,” Archbishop O’Brien said. “That’s got to be our goal It is certainly my goal. We’re all going to be involved in this. It’s going to be worth it if that is the result, if that goal is reached.”

The archbishop said the blue-ribbon committee is striving for fairness in all of its decisions.

The two-day consultations were led and guided by Monsignor Robert L. Hartnett, executive director of schools planning for the archdiocese and pastor of Our Lady of Mount Carmel in Essex. Monsignor Hartnett also assisted in choosing members of the blue ribbon committee.

“We need to be hopeful about this whole thing,” Monsignor Hartnett said. “Is there going to be a difference in Catholic schools? Absolutely. And there needs to be a difference. We need to look at the way we educate, how we educate and what are the best ways to educate. We need to be able to do that to the best of our ability for as many young people as possible. That means, given some of the limitations we’re facing right now, it needs to change. What it will look like is important for us to talk and important for us to frame.”

Monsignor Hartnett presented the latest financial information about the schools.

Elementary school enrollment declined seven percent in the last year. It was the eighth straight year schools posted a decline. There has been a yearly average drop of 5.41 percent over 10 years and there are 5,695 less elementary students in the last decade.

Thirty-one of 55 elementary schools had deficits totaling $3.1 million in the last year. Sixteen schools were late on insurance premiums totaling $5.9 million that have accumulated over the years

“We sincerely believe we have a great education process to share with our young people,” Monsignor Hartnett said.

The committee surveyed 146 priests, parish life directors, school principals and presidents recently. In addition, they studied other archdioceses. The results of those surveys resulted in four key components that must be addressed in the Catholic schools of the future: Catholic identity, stewardship, governance and academic excellence.

More than 400 people have responded to a public comments page on the archdiocese’s Web site. The comments page will close in mid-November.

In addition, 600 people recently attended 10 listening sessions throughout the archdiocese. During those meetings, people were able to voice their concerns, ask questions and offer suggestions for what should be included in the new incarnation of Catholic schools in the Archdiocese of Baltimore.

“We need to begin to draft the plan,” Monsignor Hartnett said. “Before we do that, we need to bring closure to the consultation process. We need to set an ending date to that, so we can be sure we’ve done as much of a consultation as we can.”