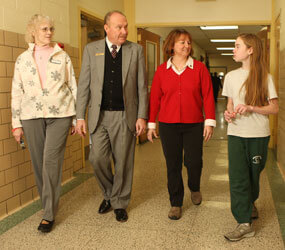 In 2007, after he was done with a stint at the U.S. Army War College at Carlisle (Pa.) Barracks, Col. Paul M. Nakasone was assigned to the National Security Administration in Fort Meade.

That meant a fourth school in five years for Sarah, the oldest of his four children.

“I was at a function at the Barracks,” said his wife, Susan Nakasone, “and another mother said ‘You have to check out Slade, we had a great experience there.’ The military had a word of mouth grapevine long before the Internet.”

Sarah Nakasone and her siblings are thriving at Monsignor Slade Catholic School in Glen Burnie. With 854 students, it is one of the largest K-8 schools in the Archdiocese of Baltimore; at least 165 of those are the children of military or Department of Defense civilian employees.

St. Joan of Arc School in Aberdeen, conversely, is a small parish school, with an enrollment of 194. Four of the newest students are from the Bodnar brood, whose parents have civilian jobs at Aberdeen Proving Ground. The wisdom of their school choice was reinforced recently for Trisha Bodnar, the mother.

“We don’t have a TV in the home,” Bodnar said, “and the Internet was down one morning when ice caused a two-hour weather delay. Not knowing that, I dropped my kids off at school. It would have been a very lonely morning if not for Mrs. Ruth, who sat and played with them.”

Whether it’s the patience and training of Kathy Ruth, the St. Joan of Arc assistant principal, or the four different band offerings at Monsignor Slade, Catholic schools in the archdiocese are poised to fulfill the needs of “BRAC brats,” students whose families come to Aberdeen Proving Ground and Fort Meade via the federal government’s Base Realignment and Closure Act.

Both schools are a short hop off an Interstate highway. It also helps that they combine a modern education with a faith tradition, as The Catholic Review learned on visits to the two campuses.

Ruth and her principal, Dr. Joan Towery, have earned a number of training certificates through a STEM (Science, technology, engineering and mathematics) grant that gave them access to the Military Child Education Coalition.

Outside Towery’s office, a bulletin board holds every student’s photo. That collage forms an American flag. The husband of middle school math and science teacher Elisa Paolucci is in the Army, and church and state appear to mix quite nicely.

The visitors to Towery’s office one recent morning include Father William Foley, the pastor of St. Joan of Arc Parish, and Sonja Flanigan, who returned her family to Harford County in part because of his predecessor.

Scott Flanigan, the Director of Public Works for Cecil County, retired from the U.S. Army as a lieutenant colonel. In 2003, he was assigned to a base in Germany, setting up the possibility of a fractious first Communion for their oldest daughter, Katherine, now a freshman at The John Carroll School in Bel Air, then a first-grader at St. Joan of Arc.

“Father Sam Young was the pastor, and asked if we wanted to have her first Communion before we moved to Germany,” Sonja Flanigan said. “Scott’s family was in Boston, mine was in Northern Virginia. That meant a lot, that Father Sam thought of that.

“I’m an Army brat myself, born in Colorado Springs the day before my father left for his second tour in Vietnam. Katherine was born in Japan. Kristen, our seventh-grader, was born at Fort Bragg (N.C.).”

So why finally settle down at this particular former post?

“My husband,” she answered, “said, ‘if the family is happy, I’ll find something.’ One of the reasons we enjoy living here and were glad to come back is St. Joan of Arc.”

She is an extraordinary minister of holy Communion, and her husband is a lector at Mass.

At St. Joan of Arc School, their daughter Kristen utilizes an IT department stocked with 35 desktop and 35 laptop computers, smart boards and an environment where the theme for 2010-11 is “Plugged in to God, Technology, Life.”

They’re strangers to Ocean City, but during their time in Germany, one family vacation in Rome included attending the papal audience at the Vatican. The Bodnar children were born in Ireland; savvy teachers know that those experiences have classroom value.

“In the same way we differentiate education for the children, we need to differentiate how we welcome them,” Towery said. “For the student who is in a motel temporarily, that might mean a desk after school to do their homework. For the second-grader having a hard time settling in, we filmed a video where he showed off his new classroom to friends at the old school.”

In Aberdeen, students walk across S. Law Street to attend liturgy at St. Joan of Arc Church. In Glen Burnie, what opened in 1954 on Dorsey Road as a parish school for nearby Holy Trinity Parish became a regional school in 1974. It draws students from numerous parishes and ZIP codes in Anne Arundel County.

That diversity is seen as a strength by Nakasone, the Army wife who serves as Slade’s liaison to families new to Fort Meade.

“My kids didn’t have to reinvent themselves to fit in,” she said. “There’s sports, Scouts, the bands. My twins are in the third grade, and I didn’t want them together in the same classroom. They’ve been treated as individuals, and grown into themselves.”

“I like the academics here,” Sarah said. “That’s helped me prepare my resume for high school.”

Her father, the Army colonel, is awaiting his next assignment. If the family remains in the area, Archbishop Spalding High is an option for Sarah. One of her best friends is Gaby Mrozek, whose father, Ken, teaches chemistry at Spalding. He’s an Army Reservist who has been deployed to both Afghanistan and Iraq in the last eight years.

Helen Wyrwas is the Slade guidance counselor helping Sarah prepare her resume. Her husband is a retired Army lieutenant colonel. They came to the area in the late 1980s, joining St. Joseph Parish in Odenton and sending all four of their children through Slade and then Spalding.

Lisa Palazzo, director of development at Slade, is preparing for Feb. 4, Red, White and Blue Day, a fixture on its Catholic Schools Week calendar. Last year, students created valentines for veterans. In 2009, they prepared care packages that were shipped overseas.

Whether Slade parents are in the military, working for a defense contractor or with deep local roots, they join a community with a history of giving.

“The Home School Association raises more than $200,000 annually for our operating budget,” Jones said. “They supplement supplies, scholarships and cultural enrichment. That tradition was in existence long before I came here in 2004.”

His network of families figures to grow.

“There was one week in December,” said Pam Rombach, registrar, “when we got a phone call every day, from a different state, from a family that was being assigned to the area.”

Jones calculates that Slade, “within our (current) parameters,” could accommodate another 94 students.

“It’s a great place to live, you’ve got cultural attractions, easy proximity to Washington and New York,” Jones said. “We’ll use our military families as ambassadors.”

He said Slade is eager to “serve Catholic families who have been relocated. We put an emphasis on that.”