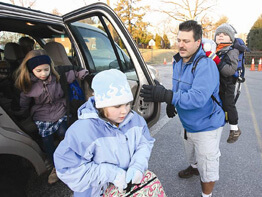 When it comes to the worth of St. Ursula School volunteers, Sister Joan Kelly, S.N.D. de N., says she could never “put a dollar figure on it.”

“Our whole building was wired for computers by a parent,” she noted.

Most volunteers, but not all, are parents. Secretary Bobbie Triplett said some are uncles and grandfathers from the school’s Father’s Club who have cleaned and painted classrooms, met wish list needs and performed maintenance.

“The entire two buildings – classrooms, offices, hallways, lavatories, lunchroom, auditorium – have been painted by the men,” said Sister Joan. “New drop ceilings have been put in all rooms in both buildings. School lavatories have all been destructed by parents before new construction has occurred. Over the Christmas holidays, two three-story staircases were repainted and new sinks were put in two lavatories.”

Approximately 120 volunteers each month work in the school and classroom alone, said Sister Joan. The school office tracks their hours because of a unique program whereby the school discounts its $3,550 tuition by $400 a year for every 20 service hours completed by a parent.

“We’ve done this for many years,” said Mrs. Triplett. “Ninety-five percent of the families choose this. More importantly, we have over 125 families that do 70-200 hours each year.”

The program serves a dual purpose: it helps the school financially and it builds spirit among the parents. “People get to know each other when they work together,” said the principal.

Other volunteer functions in the 720-student school include dinners, silent auctions, harvest festivals, baking and the Box Tops for Education program in which a parent can earn one hour of volunteer service for every 50 box tops collected.

Cathy Gallagher, principal of Our Lady of Fatima School in Baltimore, said her school saves about $30,000 a year or more by accepting volunteers’ helping hands. “They perform jobs that we do not have the paid staff to manage,” she said.

Fatima’s volunteers include parishioners, grandparents and parents; some serve at Home/School Association functions, others on the school board and steering committee.