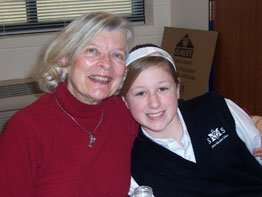 NASHVILLE, Tenn. – School officials at St. Matthew School in Nashville thought students would benefit from knowing someone else was always there to support them. That’s why they instituted the prayer buddy program when the school opened in 2000.

The original idea was to promote younger and older students getting together a few times a month to share prayer requests and words of encouragement. The initiative is still going strong, and in some cases, has even incorporated some much older buddies in the mix.

“It gives you someone to connect to spiritually,” said Kelly Cassidy, a sixth-grade teacher at the school. “For the older kids it’s great because they can practice being in that role-model situation. And when the younger kids see their prayer buddies in the hall they get so excited,” she told the Tennessee Register, diocesan newspaper of Nashville.

During the 2006-2007 school year, the growing school had an odd number of classes and did not have students to pair up with students in Cassidy’s class. So Cassidy and the school’s principal, Barby Magness, enlisted some adults in the parish to serve in that role. They decided to approach the “lunch bunch” – a group of St. Matthew’s parishioners who are 50 or older – for the pairings.

“We just randomly selected names from that group of people,” said Cassidy. “We did a donut and juice breakfast after Mass one day so the students and their prayer buddies could meet each other.”

Sixth-grader Erin Maher was matched with parishioner Suzanne Davis. The relationship began when Maher drafted an introductory letter to her senior counterpart. She wrote, “I’m your buddy. I can’t wait to meet you. I hope you write back and we can write to each other and keep in touch.”

Davis said she was delighted to receive the letter particularly because she has four grandsons and was happy at the prospect of relating to a little girl.

The two hit it off with notes to one another. Occasionally, Davis and some of her “lunch bunch” peers would visit the students in Cassidy’s classroom to watch a play or participate in a party or holiday celebration. The prayer pairs would also catch up with each other at Sunday Mass.

Even when they weren’t physically together, they were united in their thoughts. “We’d remember each other in our prayers during the day, at school or at home,” Davis said. “I’d pray that she has a good day, that God helps her in making the right choices in life, and how delighted I was that we were brought together this way.”

“It’s like having a guardian angel looking over you,” said Maher. “It’s nice to know that someone’s praying for you.”

Maher may not have understood how beneficial her own contribution was to her elder prayer partner who was “thrilled to have a relationship with a child that age.”

“It’s so nice to see the younger ones relating to a bunch of us older people. I think once these children and older people relate so well, it brings a warmer feeling to the whole church,” she added.

Davis also said the relationship gave her a “wonderful feeling that there’s hope through the younger generations. Hopefully the younger people will see the older ones in a different light. I know we’re looking at the young people differently too.”

Now that Maher’s in seventh grade, she’s suddenly the “older” one in the equation. This school year the numbers of classrooms are evenly matched, so the prayer buddies are all fellow students. Maher has kindergarten buddies that she reads to and visits during classroom activities.

Cassidy is convinced the entire school community benefits from this program. “I think it provides a sense of spirituality for the school, which is what I hope every Catholic school would strive for.”

“We’re bonded through prayer,” she added, “not just because we attend the same school.”