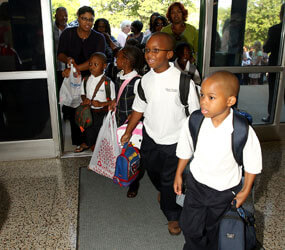 A simple printout is posted on a bulletin board in the Office of Schools Planning and Implementation at the Catholic Center.

The words on the sheet are a reminder to Monsignor Robert L. Hartnett, Mark Pacione and Mary Ellen Fise of Archbishop Edwin O’Brien’s mission – to provide an affordable education to as many children as possible, including those in the poorest areas.

It puts a tough day, of which there have been many in the last year, in perspective. Tapping the paper on a January morning, Pacione said “We’ve never lost sight of this.”

Two years ago, the archbishop formed a Blue Ribbon Committee to create a strategic plan for the future of schools in the Archdiocese of Baltimore, in response to a dramatic decline in enrollment and many schools wallowing in financial difficulties.

The archbishop created the Office of Schools Planning, naming Monsignor Hartnett, the pastor of Our Lady of Mount Carmel is Essex, as Executive Director.

It was a subtle, albeit crucial gesture, that there was an office to oversee the process of changing Catholic education.

The three staffers knew that the Blue Ribbon Committee had to deliver its strategic plan by June 2010, while the archdiocese simultaneously worked on a consolidation plan. That ended with the March 2010 announcement by the archbishop of the closure of 13 schools in Baltimore City and Baltimore County.

He called it the beginning of the “re-birth” of Catholic schools.

The Blue Ribbon Committee then delivered its plan, which came with 56 recommendations. All but one were accepted, as the archbishop asked for further study to the end multi-child tuition discounts. The strategic plan featured detailed ideas for improving Catholic identity, academic excellence, governance and stewardship.

Many organizations develop strategic plans, but never implement them. That wasn’t an option for the archdiocese.

“We knew we were going right from the Blue Ribbon process into the implementation process,” Monsignor Hartnett said. “There is a genuine desire to strengthen and enhance our school system across the board.”

In early November, the Office of Schools Planning and Implementation delivered to the archbishop a 99-page, 714-item implementation plan that addresses the 56 recommendations of the Blue Ribbon Committee.

The office has already completed 98 of the items. The rest of the plan is to be executed over the next three years, according to Monsignor Hartnett.

“This is really an effort to turn that downward spiral of enrollment around,” Pacione said. “We want to make sure that the things we cherish in so many in Catholic schools continue to be available.”

“We have very good schools,” Fise added. “This is about making them great.”

Over the last two years, the Office of Schools Planning has held interdepartmental meetings with nearly every office in the Catholic Center, fulfilling the archbishop’s request that the future of Catholic schools be everyone’s concern.

The office uses an internal working plan that features precise steps to enact the recommendations and the resource person or group responsible for making it happen by a specific date.

Among the early implementation successes: the opening of Holy Angels Catholic School in Baltimore City in September 2010; the addition of transportation for Baltimore City students in consolidated schools; the launching of several academic programs (see Page B12) and the creation of the first Archdiocesan School Board.

The school board’s inaugural meeting earlier this month was another tangle sign of the Implementation Plan at work.

“It says that this is going to be an ongoing element regarding our school system,” Monsignor Hartnett said. “There will be ongoing strategic planning, ongoing evaluation and ongoing discussion about the strength of our Catholic schools.”

In addition to the new academic programs, more host schools for programs such as STEM (Science, technology, engineering and math) will be announced soon.

“We had parents clamoring for what school was going to have what program,” Fise said. “We were deciding where those programs were going to land.”

Twelve schools will pilot a new governance model, Archdiocesan Collaborative Schools. The schools will have independent school boards, with canonical representatives. (An article on the model will be in an upcoming issue of The Catholic Review.)

Six schools, including five in Baltimore, will be labeled “community schools,” which will become hubs of activities for students and families. That is a partnership with Catholic Charities.

Whether it’s Catholic identity, academic excellence or governance of stewardship, there is a strong emphasis on leadership and expertise across the board.

“If you get the leadership right,” Fise said, “you’re going to have a great school system.”

A certain irony emerges from the passion of the Schools Planning and Implementation Office. If they succeed in their mission, they’ll need new jobs.

“We have a shelf life,” Pacione said. “All the people in the building, they’ll need to continue when we’re gone.”