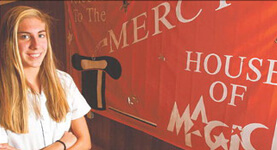 Lindsay Scheve does it all for Mercy High School.

She’s a hitter for the Magic volleyball team, and come winter, will again play wing guard for the basketball team.

Lindsay is also the secretary of the Mercy chapter of the National Honor Society, having taken advanced placement courses in English, history and psychology and carrying a 4.2 cumulative grade point average.

This is her second year as a public relations intern for Mercy, helping promote it to local middle-schoolers.

“We go on recruiting visits, and talk to sixth-, seventh- and eighth-graders,” she said. “I talk about how good Mercy is, and what it’s done for me. I love to talk to people about this place.”

“I’ve only been with them since August, but I know that the girls respect Lindsay,” McKee said. “Everyone is always on the same page, because of Lindsay. Besides that, she’s an absolutely amazing hitter.”

Along with senior Ava Trageser, Scheve led Mercy to a 6-2 early-sea¬son record. She’s been a varsity mainstay since her sophomore year in both volleyball and basketball, where she’s coached by athletic director Mary Ella Marion.

Coming out of St. Pius X School, where she is a parishioner, Lindsay earned the coveted Frances Warde scholarship, which goes to the incoming Mercy freshman who most exhibits leadership. Her work ethic has allowed her to hold on to it.

In addition to carrying a full academic load last year, Scheve, 17, logged 130 hours shadowing a nurse practitioner based in Hunt Valley. That experience went a long way toward cementing the field she will pursue in college. “The nurse I shadowed cared for children, adults, the elderly; I really, really liked it,” Scheve said. “Ideally, I’d love to play volleyball in college, but studying nursing is going to be demanding.”