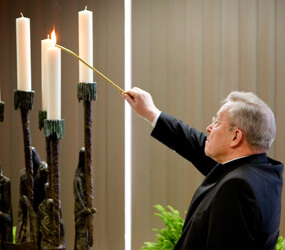 BRAINTREE, Mass. – German Cardinal Walter Kasper, the Vatican’s top official on Catholic-Jewish relations, said March 25 that not only must the Holocaust never be permitted to recur, but that Holocaust denial must likewise never happen again.

“The memory of what happened now 65 years ago cannot be forgotten,” said Cardinal Kasper at the rededication of Boston’s Holocaust Memorial Menorah at the Archdiocese of Boston’s pastoral center in the Boston suburb of Braintree.

“No Holocaust denial, which is a new injustice to the victims, can be allowed or permitted,” said Cardinal Kasper, president of the Pontifical Council for Promoting Christian Unity.

“The memory must be a ‘memoria futura,’ a memory for the future we hand down to future generations,” he added. “We have to commemorate it and must learn many lessons from this sorrowful memory in order to ensure that such horrors are never repeated again.”

Cardinal Kasper said, “The memory of the Holocaust is still an unfinished agenda.”

He recalled Pope Benedict XVI’s visit to the synagogue in Cologne, Germany, when the synagogue’s rabbi said, “My mother who died in Auschwitz could never imagine that one day her son would greet a German pope visiting her synagogue destroyed during the Second World War and then rebuilt.”

Of Christian-Jewish relations, Cardinal Kasper said, “We initiated a new relationship built on our common roots, with mutual respect also regarding what differentiates us and in a common willingness to cooperate in providing a better world for our children and the children of our children, a world where such terrible events will never again happen, a world of justice and peace, a world of mutual respect for all faiths and all convictions.”

A couple of days earlier, in Collegeville, Minn., Cardinal Kasper spoke on theology and faith – and sometimes the lack of it – during an address at St. John’s University.

“Thinking of God as absolute freedom means understanding God as a liberating God and the world as a place of freedom,” he said March 23.

“Following the trauma of the wars of religion, theology underwent a process of purification through a process of self-criticism and constructive confrontation with the modern Enlightenment,” he said. “Today all Christian churches profess freedom of religion, avoidance of violence, tolerance and respect toward other religions; while maintaining their own identity, they seek not conflict but dialogue.”

He added, “The main Christian churches today no longer have difficulty in reconciling creation and evolution.”

However, he said, “this does not mean that (Charles) Darwin becomes a new father of the church and evolution a new dogma. Evolution is and remains a scientific theory or hypothesis and not a matter of faith.

“So those who believe they have the evidence can deny evolution, but they cannot do it in the name of Christian faith,” he said.

“In this sense theologians of all the main churches now leave it to the fundamentalist Christians, as well as the fundamentalist atheistic movements, … to see belief in creation and the theory of evolution as mutually exclusive alternatives, and to counter the theory of evolution with creationism – a literal understanding of the biblical creation narrative,” Cardinal Kasper said.

“Theology which deserves to be taken seriously,” he said, “knows how to distinguish the assertion of belief that God created the world from the scientific question of how the origin and development of the world came about.”