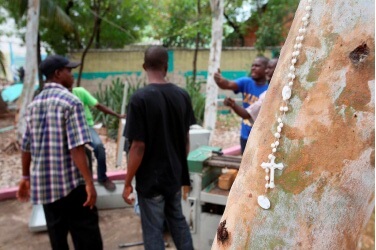 PORT-AU-PRINCE, Haiti – Haiti urgently needs a Marshall Plan-style project with U.S. and European backing if the poverty-ridden country is to ever recover from the massive Jan. 12 earthquake, said the vicar general of the Salesians.

“The greatest poverty of the people is absence of government and a humane system,” said Salesian Father Adriano Bregolin during a visit to Port-au-Prince in early March to observe how the order’s extensive network of ministries was faring since the earthquake.

His visit included stops at schools and training centers, as well as in Cite Soleil, a neighborhood in the Haitian capital notorious for its gangs and violence. The Rome-based priest also visited the badly damaged towns of Leogane and Jacmel, southwest of Port-au-Prince.

Father Bregolin told Catholic News Service that on an earlier trip to Haiti he found its considerable violence and poverty troublesome. During his most recent visit, he said he was awestruck at the apparent lack of a comprehensive government plan to rebuild the devastated region where about a third of all Haitians live.

“There are a few men here from other countries working on rebuilding but you don’t see enough machines removing materials,” Father Bregolin said, adding that a stronger Haitian military might have been helpful in the recovery.

He said it was a mistake for former Haitian President Jean-Bertrand Aristide, a former Salesian priest, to disband the armed forces during his tenure in the mid-1990s. That left a power vacuum and little security on the streets, according to Father Bregolin.

“Coming back to this situation is more grave because of the natural poverty of Haiti,” he said.

The Salesian priest said he hopes Germany and France will join the U.S. in implementing a massive aid project, rather than leave other nations to fill the void. He expressed particular concern that socialist countries such as Cuba and Venezuela, which already have business and health projects in Haiti, would gain a stronger foothold.

At the same time, Father Bregolin left Haiti impressed by the spirit of the Haitian people.

“Their possibilities are very few but they are full of hope for the future,” he said. “We need to immediately rebuild the schools because without education we have no chance to transform society and create a new mentality.”

The situation in Haiti is explosive, he added, if outside assistance dwindles in the coming months. People displaced by the earthquake will grow desperate because of a lack of jobs, education and food, he predicted.

“Today they are calm but what will tomorrow be?” Father Bregolin said. “It is impossible to continue for many months or years like this.”