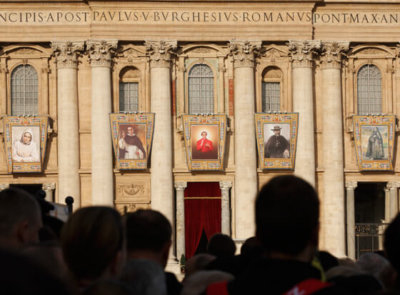 ROME – The Rite of Canonization Oct. 11 included a brief biography of each of the new saints, read by Archbishop Angelo Amato, S.D.B., prefect of the Congregation for the Causes of Saints, and a sung litany of saints. Then Pope Benedict XVI pronounced a formal declaration of canonization. Relics of each saint were brought to the altar. The saints were presented to the pope in this order:

• St. Sigmund Felix Felinski (1822-1895) was born in what was then Poland, but is now Ukraine. He studied for the priesthood in St. Petersburg, Russia, and eventually became Archbishop of Warsaw, Poland, in 1862 where he brought about a spiritual revival in his archdiocese by promoting religious and civil rights. After just 16 months, Tsarist authorities exiled him to Siberia.

• St. Francis Coll Guitart (1812-1875) of Spain, founder of the Dominican Sisters of the Annunciation, was especially dedicated to missionary preaching, even in the last few years of his life while he suffered from progressive apoplexy and the resulting blindness.

• Joseph de Veuster (1840-1889), who later became a priest of the Congregation of the Sacred Hearts of Jesus and Mary and took the name Father Damien, will likely be known to the world as St. Damien of Molokai. Born in Belgium, he entered the Congregation of the Sacred Hearts like his brother and when his brother’s illness prevented him from going on a mission to the Hawaiian Islands, Damien obtained permission from the order’s superior to take his place. There, he began a ministry to the lepers who had been deported and isolated on Molokai, and it is there that Father Damien eventually contracted the disease himself, becoming known as a model and hero of charity.

• St. Raphael Arnáiz Báron (1911-1938) had a brief life focused often on the Blessed Sacrament and the Blessed Mother — “the Lady” as he liked to call her. Shortly after entering the monastery, he contracted a serious form of diabetes mellitus, a painful infirmity. He was forced to leave the monastery time and again for treatment, but he remained faithful to his vocation. At World Youth Day in 1989, Pope John Paul II upheld him as a model for today’s young people.

• St. Jeanne Jugan (1792-1879), known in the official canonization papers as Marie de la Croix (Jeanne) Jugan, was born in France, and soon devoted her life to Christ, living an active and contemplative life focused on Jesus. She began her ministry to the elderly poor in the late 1830s and early 1940s when she brought a woman to her own home and gave up her own bed. She later started first a home for 12 residents, then purchased a convent for 40 people, supporting these homes by begging. As some young women joined her work, she founded the Congregation of the Little Sisters of the Poor, which later received official approval. By the time Jeanne died, the congregation numbered 2,400 Little Sisters in 177 homes on three continents. Now, across the world, the Little Sisters sponsor 202 homes serving 13,232 residents in 32 countries, including more than 30 homes in North America.

Compiled from the Biographical Profiles of the Beati (beatified) as presented in the book prepared by the Vatican’s Office of the Celebration of Liturgy.