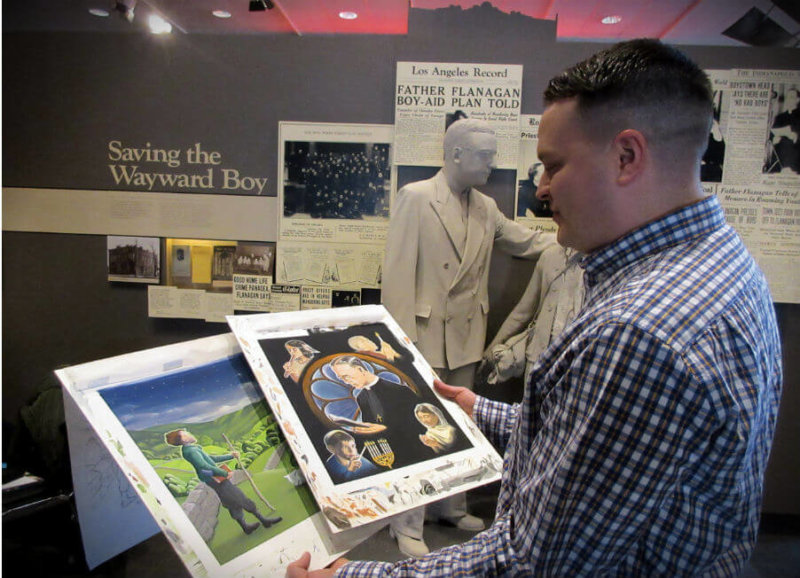 Eli Hernandez looks over examples of his artwork for his children's book "Dearest Children: A Message Inspired by Father Edward J. Flanagan" March 17 at Boys Town's Hall of History museum in Omaha, Neb. (CNS photo/Erin Keller, for the Catholic Voice)

OMAHA, Neb. — Each illustration took up to 20 hours, often done in the middle of the night after his family was asleep.

And each was necessary for Eli Hernandez to complete his 30-page children’s book, “Dearest Children: A Message Inspired by Father Edward J. Flanagan.”

Working at night and on weekends, the project took about a year to complete, said Hernandez, manager of design and production in the marketing and communications department at Boys Town, the home for boys and girls in need founded by the priest more than 100 years ago.

“I borrowed from sleep to finish the project,” Hernandez told the Catholic Voice, newspaper of the Archdiocese of Omaha.

“Dearest Children” was written, he said, to help students in kindergarten through fifth grade understand the values of Father Flanagan, who cause for canonization is being considered by the Congregation for Saints’ Causes at the Vatican. The priest was given the title “servant of God” when his cause was opened.

The author hopes the book’s illustrations and message will resonate with children of all ages.

“I have always thought about writing a children’s book. As the cause of Father Flanagan sainthood progresses, I realized that was the perfect topic,” Hernandez said.

The priest was an integral part of the process as well, the illustrator said.

“I would talk to him as I worked,” he recalled. “When I felt stuck, I would go to the chapel and sit with him. I’d ask him to pray for me as I worked.” The Irish-born Father Flanagan died in 1948 at age 61.

A member of St. Margaret Mary Parish in Omaha with his wife, Carey, who teaches art at the parish school, Hernandez said the book’s title was inspired by the term Father Flanagan used to address children in his care.

Each turn of the page leads to a Father Flanagan quote brought to life through Hernandez’s illustrations, many of which are based on photos of the priest and others at Boys Town. Each quote is paraphrased in ways intended to speak to children’s hearts.

Hernandez’s four children helped by posing for some illustrations. One, for example, depicts Father Flanagan — who was frail as a boy growing up in Ireland helping his family tend sheep — with a book in one hand and a shepherd’s staff in the other.

“Have you heard of the sickly boy from Ballymoe who became the man who realized a dream? A dream to bring healing and hope to children in need?” the text reads.

A Father Flanagan quote included with the illustration follows: “When you help a child today, you write the history of tomorrow.”

The book also provides opportunities for families to learn together.

When Hernandez presented it to Erin Green, director of Boys Town Press, she suggested that he contact Laura Buddenberg, Boys Town director of pastoral affairs, to provide supplemental activities for the book, such as encouraging families and children to be compassionate, make sacrifices for others and pray at meals.

“The book is a good example of beauty blending with core principles put into action,” said Buddenberg, a member of St. Leo the Great Parish in Omaha. “Although the book is intended for children K through five, I have had many teenagers come into my office and simply sit and look through the illustrations. The art speaks to all ages.”

Hernandez welcomes opportunities to talk with elementary school students about Father Flanagan and the process of creating the book.

“My hope is that this book creates the next generation of followers of Father Flanagan’s vision,” he said.