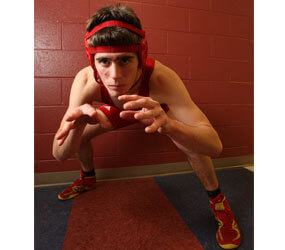 The wrestling coach sees it on the mat and in the hallways of Calvert Hall College High School in Towson each day.

It was away from school, however, where Lobdell saw Rutledge truly shine.

During a four-day service project, Rutledge and his teammates worked at a local camp for autistic children. They helped the children horseback ride, participate in scavenger hunts, kayak and participate in other fun activities. Rutledge’s camper was scared to enter a pond at the start of the week, but by the end of camp had the confidence to reach the middle.

“Forrest seemed to really click with the kid,” Lobdell said of the junior. “He is the prime case of leading by example.”

He has a 3.98 cumulative grade point average and plans on applying to the United States Military Academy and the United States Naval Academy. He is a member of the National Honor Society and has taken both Spanish and Russian language courses.

“Once I got here, I thought it was going to be like every other high school,” Rutledge said. “But, it really does try to help you. You meet a lot of new friends.”

Rutledge initially thought he would play lacrosse for Calvert Hall, but found his niche on the wrestling team, where he serves as a captain. Rutledge put in work in the weight room and participated in several grueling camps this summer to improve his skills.

“I think it’s a really cool community sport,” said Rutledge, who wrestles at 160 pounds. “It seems more like a family. It takes a lot of personal dedication. I just go to practice every day and work my hardest.”

Lobdell said Rutledge shows his younger teammates how to be a Cardinal wrestler.