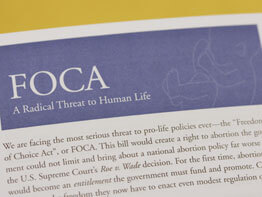 WASHINGTON – Internet rumors to the contrary, no Catholic hospital in the United States is in danger of closing because of the Freedom of Choice Act.

As a matter of fact, the Freedom of Choice Act died with the 110th Congress and, a week after the inauguration of President Barack Obama, has not been reintroduced.

But that hasn’t kept misleading e-mails from flying around the Internet, warning of the dire consequences if Obama signs FOCA into law and promoting a “FOCA novena” in the days leading up to Inauguration Day.

The Catholic Health Association “is strongly committed to opposing FOCA and (the board) is unanimous that we would do all we could to oppose it,” said Bishop Robert N. Lynch of St. Petersburg, Fla., an elected member of the CHA board of trustees since June 2006.

“But there is no plan to shut down any hospital if it passes,” he added in a Jan. 26 telephone interview. “There’s no sense of ominous danger threatening health care institutions.”

Sister Carol Keehan, a Daughter of Charity who is CHA president and CEO, was equally sure that FOCA poses no threat to Catholic hospitals or to the conscience rights of those who work there.

“I don’t believe that FOCA will pass, although we will continue to monitor all proposed regulations for their potential to help people in this country and for any negative assault on the life issues,” she said.

As introduced in previous congresses, the legislation “has never contained anything that would force Catholic hospitals or Catholic personnel to do abortions or to participate in them,” she added.

But even in a worst-case scenario, if the most dire predictions were to materialize and a federal law were to mandate that all hospitals provide abortion services, “I want to make it very clear that Catholic health care will not close and we will not compromise our principles,” Sister Carol told Catholic News Service Jan. 26.

If necessary, Catholic hospitals will take a lesson from “how people have dealt with unjust laws” in American history, “and we would respond in the same way,” she said.

“A very timely example” of that is segregation, which was backed up by U.S. laws and Supreme Court decisions that were unjust, Sister Carol said. “It was a very long and very painful journey to deal with that and now we have an African-American president,” she added.

Some of the confusion over FOCA might arise from the fact that the U.S. Conference of Catholic Bishops launched a long-scheduled postcard campaign to Congress against the possible legislation just as the false Internet rumors were reaching a peak.

The postcards, which are being made available for Catholics to sign at Masses over several weekends in January and February, ask members of Congress to oppose FOCA “or any similar measure, and retain laws against federal funding and promotion of abortion.”

“At this time of serious national challenges, Americans should unite to serve the good of all, born and unborn,” the postcards say.

The FOCA novena e-mails, the source of which has not been identified, have a different tone entirely.

Calling the legislation “the next sick chapter in the book of abortion,” the e-mails say it will force all hospitals to perform abortions, increase abortions by 100,000 annually and “could result in a future amendment that would force women by law to have abortions in certain situations (rape, Down syndrome babies, etc.) and could even regulate how many children women are allowed to have.”

The rumors have spread like wildfire on blogs and Web sites. On the social networking site Facebook, three separate anti-FOCA groups with membership totaling nearly 130,000 (as of early Jan. 27) contain misinformation about what the so-far-nonexistent legislation would do.

Bishop Kevin W. Vann of Fort Worth, Texas, is “brand new as episcopal liaison” to the Catholic Health Association, a position he got in part because of his background as a medical technologist for three years in a Catholic hospital in Springfield, Ill., before he began his seminary studies.

“There is nothing definite yet about what is being introduced” in Congress, he told CNS Jan. 26. “But CHA is really committed to monitoring any proposed legislation and to upholding the sacredness of life in all our institutions.”

Bishop Vann said the postcard campaign, run by the U.S. bishops’ pro-life office and the National Committee for a Human Life Amendment, is getting a good reception from Catholics in his diocese.

“It’s real simple,” he said. “It’s the voice of everyday folks expressing concern about FOCA in whatever form it comes.”