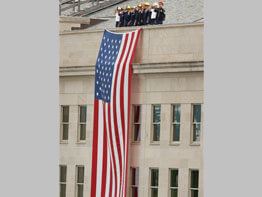 The Knights of Columbus and St. Clement Mary Hofbauer parishioners paused at the Rosedale parish on the morning of Sept. 11 to observe the Knights’ World Day of Prayer for Peace.

As the tail end of rush hour traffic rumbled on nearby Pulaski Highway, a gathering of nearly 100 took time for a service that mixed hymns, patriotism, scripture and silent prayer.

The effort to individually and collectively promote peace came on the seventh anniversary of Sept. 11, 2001, the largest terrorist attack in U.S. history.

In his reflection, Father Donald Grzymski, O.F.M. Conv., the St. Clement pastor and chaplain for the Knights’ Maryland State Council, recalled his reaction to attacks that ended a combined thousands of lives in Manhattan, at the Pentagon and in Western Pennsylvania.

“When I first heard about it, I thought it was an accident,” Father Grzymski said of the hijacked jets that destroyed the World Trade Center’s twin towers. “As the day played out, I had feelings of anger and fear. … We came to appreciate the sacrifice of those who died, and those who went to serve and gave their lives.”

He then referred to the second reading, Colossians 3:12-15.

“What did St. Paul tell us to do?” Father Grzymski said. “Practice humility, kindness, patience. Through continued conversion in our own hearts, we can bring peace.”

The readings were given by Richard V. Siejack, the State Deputy of the Maryland State Council, and his wife, Patricia. They are parishioners of St. John the Evangelist, Hydes, where Mr. Siejack is a member of Long Green Valley Council 8736.

“Father Donald came up with the idea to have the service,” Mr. Siejack said. “It’s an experience in which we can reflect on the significance of things that have happened, and spiritually, it’s a way we can give back. We let people know, that if you can’t be here, do something on your own.”

Two days after the Sept. 11 attacks, the Knights of Columbus established a $1 million “Heroes Fund,” for families of law enforcement officials, firefighters and emergency medical personnel who lost their lives.

The service took place as Father Grzymski’s parish prepares for the Sept. 13 dedication of its new narthex, which has been constructed in the rear of St. Clement, where concrete was still drying. Bishop Mitchell T. Rozanski, eastern vicar, will dedicate the gathering space at 5:45 p.m. Sept. 13, then celebrate 6 p.m. Mass.