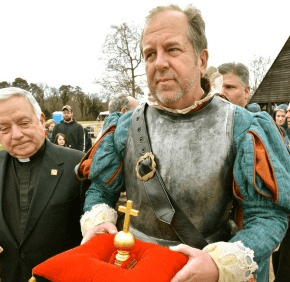 By Mark Zimmermann
Courtesy Catholic Standard
ST. MARY’S CITY  – This year’s celebration of Maryland Day at Historic St. Mary’s City was all about roots – the state’s roots as the cradle of religious liberty in the United States, and the roots of Maryland’s Liberty Tree, remnants of which were fashioned into a cross that is now part of the reconstructed Brick Chapel of 1667.
The March 19 ceremony culminated in a procession in which the Liberty Tree Cross was carried into the chapel, where the cross is part of the reconstructed Carroll family tabernacle, based on the one that scholars believe was used at the chapel in the 17th century.
The rebuilt Brick Chapel stands as a symbol of Maryland’s status as the birthplace of religious freedom in what became the United States. The Maryland colony was founded in 1634 by Lord Baltimore, a Catholic, on the ideals of freedom of conscience and religious toleration, which at that time were revolutionary concepts for England and its colonies.
Maryland Day in 2016 marked the 382nd anniversary of March 25, 1634, when those first English colonists, representing various faiths, landed on St. Clement’s Island in what is now St. Mary’s County in Southern Maryland. On that spot, Jesuit Father Andrew White celebrated the first Catholic Mass in the English-speaking colonies.
The annual commemoration had added poignance this year, as the Liberty Tree Cross was blessed the day before by Baltimore Archbishop William Lori at a ceremony at Fort McHenry National Monument. It was then placed on board the rebuilt 1812-era topsail schooner Pride of Baltimore II, where it was transported to Historic St. Mary’s City.

Archbishop William E. Lori blessed the Liberty Tree Cross March 18 at Fort McHenry National Monument. It was then placed on board the rebuilt 1812-era topsail schooner Pride of Baltimore II, where it was transported to Historic St. Mary’s City. (Maureen Cromer/CR Staff)

The Maryland Liberty Tree was a 600-year-old tulip poplar in Annapolis that served as a meeting spot for colonists seeking freedom during the American Revolution, and reportedly Washington and Lafayette met under the tree before marching to Yorktown. After the tree was destroyed by Hurricane Floyd in 1999, some of the roots were saved and later fashioned into three wooden crosses. The first two crosses were presented to Pope Francis and Prince Charles, and the third was brought to Historic St. Mary’s City for the tabernacle at the rebuilt Brick Chapel.