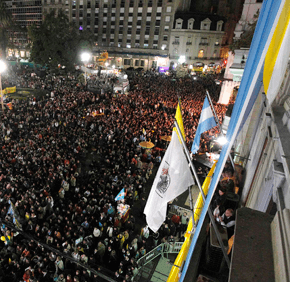 By David Agren
Catholic News Service
BUENOS AIRES – The celebrating started late March 18. Outside the Metropolitan Cathedral, in the expansive Plaza de Mayo, rock bands played. Vendors in the area peddled pictures and posters of Pope Francis, as well as pope-themed cushions, calendars and key rings.
Seminarians and youth groups began praying for the new pope. Trucks came to accept donations for the poor; Pope Francis had asked Argentines not to spend money traveling to Rome for his inauguration.
Instead, they rose early and watched the hometown resident elevated to head of the world’s Catholic Church.
“We never dreamed that this would be him,” said Juana Lucia Paz, a social worker dressed in a wig of blue and white, Argentina’s national colors. She arrived outside the Metropolitan Cathedral at 2:30 a.m. from outlying Buenos Aires province. “This is a blessing for this country, an enormous sense of pride — for the whole world.”
Even in a country with significant non-Catholic and non-practicing Catholic populations, Pope Francis — until March 13, Buenos Aires Cardinal Jorge Mario Bergoglio — is seen as a religious person raising the country’s profile.
The Buenos Aires government closed public schools March 19, and church bells were to be rung at noon for 10 minutes. Mass was to be celebrated later at all parishes in the archdiocese for the feast of St. Joseph — instructions given by Pope Francis.
“The election of Pope Francis is one of the most important events that have been produced in Argentine history and greatly exceeds its religious nature,” the city said in a statement.
Thousands watched as their former archbishop addressed them by satellite in the predawn hours. He thanked them for their prayers and told them: “Care for the family, care for nature, care for children, care for the aged. Let there be no hatred, no fighting, put aside envy and don’t gossip about anyone.”
The crowd applauded and prayed as the pope’s inaugural Mass was broadcast on big screens. Many in the crowd clutched Vatican and Argentine flags. Others waved signs saying, “He arrived from the end of the world.”
“For Argentina, it’s important,” said university student Nicolas Sivina, 18. “He’s the first pope from Argentina, the first from Latin America.”
“I believe there are going to be changes for the better. … With more people like him, humble and simple,” said Catalina Ibanez, who works in a cloister and recalled serving Pope Francis coffee.
Special education teacher Gabriela Juarez, 37, recalled sometimes attending Mass celebrated by Pope Francis while he was still a priest.
“He was then the way he his is now,” said Juarez, who participated in a theater production for the crowd before the installation.
“He was concerned for young people,” she added. “He had simple words, that teenagers could relate to.”
Juarez said she recently returned to the church after falling away for nearly 20 years.
“People change their way of thinking,” she said.
See also:
Rabbi’s friendship with Pope Francis began with soccer, led to improved Catholic-Jewish ties in Argentina
In Buenos Aires slum, church counters drugs, evangelicals
Copyright (c) 2013 Catholic News Service/U.S. Conference of Catholic Bishops
PrevNext