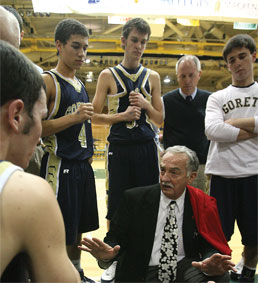 At the end of this month, Cokey Robertson, head basketball coach for St. Maria Goretti High School, Hagerstown, will turn 70 years old and will retire from the Gaels program – which he put on the map.

Robertson is an icon in the Central Maryland region and certainly throughout the Baltimore Catholic League (BCL), and he was recently honored with a Lifetime Achievement award at the BCL Luncheon on Feb. 17 at Snyder’s Willow Grove in Lansdowne. Robertson, who is the winningest active coach in the state, has put together a record of 698-449 in his 34 years with the Goretti Gaels. Robertson has coached in the BCL for 24 seasons.

“The BCL was blessed to have Cokey in the league,” said BCL League Commissioner Jack Degele. “He gets the most out of his players and teaches his players more than just the game. He teaches life skills and is a great competitor.”

The Goretti Gaels ended their season during the 37th-anniversary tournament for the Baltimore Catholic League in a first-round loss to St. Frances Academy 57-48.

Those close to Robertson and the Goretti program know that Coach Robertson wanted to see his grandson, 6-foot-1 senior Mitch Belella, through his senior year. He was that kind of man. He was dedicated, strong and vibrant in his approach with his players, and yet he was a no-nonsense kind of guy.

Carol Brashears, Goretti’s athletic director, said, “His impact on Goretti is immeasurable because it reached far more than on the basketball court. This was one man who proved that being at a small school can accomplish great things.”

The school celebrated Robertson’s retirement Feb. 29 during its junior varsity and varsity games against Bishop Walsh High School, Cumberland. The Gaels came away victorious, and more than 50 former Gaels came back to the court where Coach Robertson had provided a solid foundation for life lessons and a greater understanding of the game of basketball.

Rodney Monroe, whose college and professional basketball career soared after four successful years under Robertson, returned to pay tribute to the coach at The Gael Center, also known as Cokey’s Court.

The crowd grew quiet as Monroe stepped to the microphone. “Coach, I played four years of high school, four years of college and 14.5 years of professional ball, and you are the best coach I ever had.”

The Goretti Administration has not started the search process for a new coach.