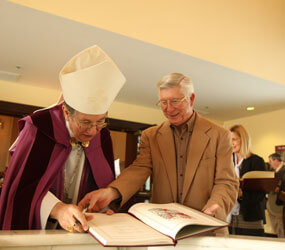 Although she was raised Methodist, Amanda Nelson didn’t place a lot of attention on her faith growing up. After marrying a Catholic and recently having her son baptized in the Catholic Church, the 30-year-old decided to explore the religion of her husband more closely.

“I want to be able to answer any questions my son has,” said Nelson, who enrolled in the Rite of Christian Initiation of Adults at St. Stephen in Bradshaw to begin the process of joining the Catholic Church. During the Easter Vigil at her parish, Nelson will receive the sacraments of holy Communion and confirmation and become a full member of the church.

“I literally went into this not knowing any background in the Catholic faith,” Nelson said. “I think what I’m most looking forward to is actually having my first Communion. I feel that will make me be even closer to God.”

Nelson was one of 373 candidates (those who have been baptized but have not received the sacraments of Communion and/or confirmation) and 158 catechumens (those who have not been baptized) who filled the Cathedral of Mary Our Queen in Homeland Feb. 21 for the annual Rite of Election. Similar celebrations were held at St. John Neumann in Annapolis and St. Ann in Hagerstown. Between the three ceremonies, 247 catechumens and 593 candidates participated.

“You catechumens and candidates may be the spark to enkindle the Holy Spirit within the rest of us,” he said.

At their home parishes, the catechumens signed the Book of the Elect to symbolize their commitment to the church. During the Rite of Election, their godparents gathered with the catechumens in the sanctuary to affirm to the bishop that the catechumens have listened and responded to God’s word. Candidates and their sponsors were also called to the sanctuary, where sponsors affirmed the candidates’ call to continuing conversion.

Sharon A. Bogusz, archdiocesan coordinator for evangelization and adult catechesis, said the exact number of people entering the church will likely be higher than what was reflected at the Rite of Election. She expects it to surpass 900 at the Easter Vigil – a similar number to last year.

Bogusz noted that RCIA has a twofold evangelizing mission. It invites and forms new members while inspiring a renewed enthusiasm of faith among those who have already received the sacraments.