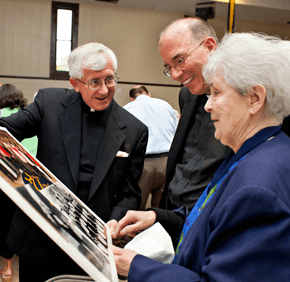 Cardinal Edwin F. O’Brien helped St. Ursula, Parkville, gear up its 75th anniversary April 28, when he celebrated Mass at the parish that was established in 1937.

They were joined by area clergy and Sister of Notre Dame de Namur Joan Kelly, principal of St. Ursula School.

The parish has scheduled other events for the anniversary year.

On June 10, after noon Mass, it will hold a picnic at nearby Double Rock Park. On Aug. 25, it will be host to a Crab Feast in its Spiritual Center, after 5 p.m. Mass. The anniversary year will culminate with Feast of St. Ursula Celebration Oct. 21, after 11 a.m. Mass in the school auditorium.