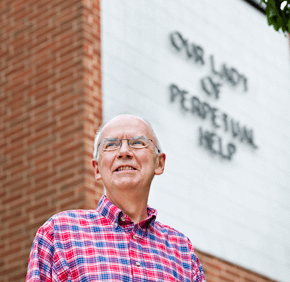 ELLICOTT CITY – Retirement still hadn’t struck Rich Sliwinski in early August, and he didn’t think it would for quite awhile, he said.

As a teacher, he always had summer off, so he was used to a leisurely schedule during the hottest months. It would still take awhile for the reality to set in, he said.

Sliwinski retired in June after 40 years teaching in Catholic school classrooms, the last 22 years at Our Lady of Perpetual Help School in Ellicott City.

A ceramic mug painted by a child. A clunky masking tape dispenser. A box of short bulletin board pins, nearly empty, that Sliwinski has slowly depleted over four decades – tokens of a longtime elementary school teacher.

His classroom had tiny chairs, tiny desks and a hand sanitizer dispenser affixed low on the wall. A first-grade instructor, Sliwinski began teaching young students in the 1970s, when men were a rare sight in primary grades.

“I remember the first year I taught first grade, it was just overwhelming to me how much (students) changed in 10 months,” he said. “Everything is so new, school is so new.”

First-graders are an “unusual group of kids,” he added. “They’re so alive, they’re so active.”

Also in the box is a mug with the ubiquitous “I love NY,” with the large red heart.

A native of Queens in New York City, Sliwinski joined the Congregation of the Brothers of St. Francis Xavier after high school and began a teaching career that took him to southern Maryland, Virginia and California before he settled in Baltimore, first teaching at St. Ambrose Catholic School in Park Heights, which closed this year.

He left the Xaverians about 15 years ago, but credits them for shaping who he is, he said.

Sliwinski had “great experiences” during his own elementary years at a Catholic school. “What I remember was fun,” he said.

As a teacher, Sliwinski tried to think in five-minute time periods to accommodate active and easily distracted minds. He kept a framed adage in his classroom that reads: “Teacher’s task: Take a bundle of live wires and see that they are well grounded.”

That was also in the box, next to a foam-headed toy hammer which he brought out to jestfully “threaten” unruly kids – a memento he might give away to another teacher, he said with a smile.

Over the years, Sliwinski told students they are in school “to work, to learn and to grow.”

“I just wanted them to lean that school is fun, that learning is fun, and it’s something they were going to have to do their whole life,” he said.

Some of his former students have become teachers, and he knows some men who are considering teaching primary grades.

According the National Education Association, 10 percent of elementary teachers are men. Sliwinski thinks it is good for elementary students to experience having both male and female teachers, he said.

Brandy Munoz, the school’s administrative assistant whose son had Sliwinski as a teacher, described him as “an awesome role model for the kids” who was sensitive, yet stern.

Second-grade teacher Alexis Baldwin described that combination, too. “He was tough on the outside and a marshmallow on the inside,” she said.

Sliwinski mentored Baldwin when she joined OLPH’s staff three years ago after teaching for 22 years at St. Agnes School in Catonsville, she said.

Baldwin taught across the hall from Sliwinski and called him a “dynamic” teacher who found innovative ways to keep his students engaged.

“He touches the lives of all the students in the school,” Baldwin said. “I don’t know one student who has not looked up to him, admired him.”

A parishioner of Corpus Christi in Bolton Hill, Sliwinski has simple expectations for retirement such as matinee movies and midweek grocery shopping, he said. He hopes to substitute teach at OLPH while he discerns what to do next in life, he said.

Sliwinski always wanted to be a teacher, he said. “I played school for 40 years. I enjoyed it. It seldom felt like work,” he said.

In an April 5 letter announcing his retirement to parents, Sliwinski shared that sense of “playing school,” and wrote, “It’s finally time for me to decide what I want to do when I grow up.”

Baldwin said that Sliwinski will be missed, but that she expects he’ll miss the students, too.

“After 40 some years in education, that’s a hard thing to just take away from your life cold turkey,” she said.