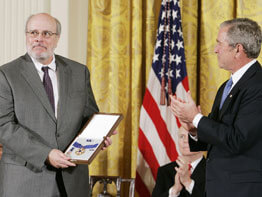 WASHINGTON – Henry Hyde, retired Republican Congressman from Illinois, was one of three Catholics to receive the Presidential Medal of Freedom, the nation’s highest civilian honor, during a Nov. 5 White House ceremony.

Hyde retired last year after 32 years in Congress where he chaired the Judiciary and International Relations committees and was an outspoken leader in the pro-life movement.

He was unable to attend the White House ceremony because he was recuperating from quadruple heart bypass surgery, but his son Bob accepted the award for him, saying it “affirms the importance and the value of his stance on many things, like right to life.”

President George W. Bush described Hyde as a “commanding presence” and “a man of consequence,” who impressed colleagues with his “extraordinary intellect, his deep convictions and eloquent voice.”

He also said Hyde “used his persuasive powers for noble causes” particularly in “being a gallant champion of the weak and forgotten, and a fearless defender of life in all its seasons.”

Other Catholic recipients of the award were Cuban human rights activist Dr. Oscar Elias Biscet and Brian Lamb, president and CEO of C-SPAN.

Biscet, a physician, was honored for his work to advance human rights and democracy in Cuba. He is currently a political prisoner in Havana, so his son Yan Valdes accepted the award for him.

Bush described Biscet as “a healer” and someone known in his country as “a physician, a community organizer and an advocate for human rights.”

Biscet, who has been in prison for most of the past eight years, was arrested in the late 1990s while he was participating in an anti-abortion demonstration outside a Havana hospital. He was charged with disorderly conduct, instigating criminal acts and dishonoring national symbols.

His Medal of Freedom citation noted that, “despite being imprisoned for his beliefs, (Biscet) remains a powerful advocate for a Cuba in which the rights of all people are respected.” It also said the United States stands with him “in his heroic struggle against tyranny.”

In honoring Lamb, the founder of C-SPAN, Bush joked that the network is “not what you’d call exciting TV,” but he also called it “a tool that enlivens democracy and informs and educates citizens of all ages – at all hours.”

C-SPAN is a private, nonprofit company, created in 1979 by the cable television industry as a public service. It provides live coverage of Congress and House and Senate committee hearings and other public events.

Lamb’s citation credited him for elevating public debate and enriching civic life. It said the United States was honoring him for his “efforts to ensure that his fellow citizens are well-informed participants in the American system of self-government through reflection and choice.”

Among the other five recipients was economist Gary Becker, who won the Nobel Prize for economics in 1992. He was appointed to the Pontifical Academy of Sciences in 1997 for his research on how economics influences other areas of human and interpersonal activity.

During the White House ceremony, Becker was described as “one of the world’s great economists and premier intellectual innovators” who “broadened the spectrum of economic life and social science.”
Becker’s citation praised him for his “groundbreaking contributions to economics” which have “helped improve the standard of living in developed and developing nations.”

Francis Collins, director of the National Human Genome Research Institute, was recognized for his work in genetic research and leading the Human Genome Project which mapped and sequenced the full human genome. Collins has been widely respected for his insistence that science and religious faith are not mutually exclusive. In 2006 he wrote “The Language of God: A Scientist Presents Evidence for Belief.”

Harper Lee, Pulitzer Prize-winning author of “To Kill a Mockingbird,” received the presidential medal in recognition of the book’s work in helping “focus the nation on the turbulent struggle for equality.”

Last year Lee received an honorary doctorate from the University of Notre Dame in Indiana. As the degree was presented, the graduating class stood up holding aloft copies of the book and cheering for the author.

Other recipients of the Presidential Medal of Freedom included President Ellen Johnson Sirleaf of Liberia and Benjamin Hooks, who is a pioneer of the civil rights movement and who was executive director of the National Association for the Advancement of Colored People for 15 years.