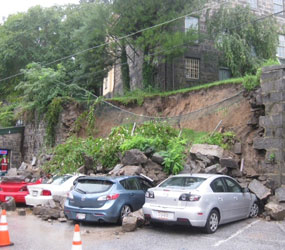 A large granite retaining wall at St. Paul in Ellicott City collapsed on top of six parked cars at approximately 3 a.m. Sept. 8, an apparent victim of flooding and possible damage from last month’s earthquake. No one was injured.

“It was over 200 years old and shored up the hill,” said John Papania, the parish business manager who was on the scene several hours after the incident. “The damage to the cars was beyond serious.”

Structural engineers, Howard County and archdiocesan officials inspected the site Sept. 8. They are still determining who owns the wall. Papania noted that one official said damages for the vehicles and wall could be as high as $1 million.

Dohony Hall, a parish building that rests on the hill behind the retaining wall, was found to be unaffected by the collapse. Parish officials have not decided, however, whether religious education classes will proceed this weekend in the building. Masses are unaffected.

“We are shoring up the bank with a diversion for the drain pipes to divert whatever water we can,” Papania said.