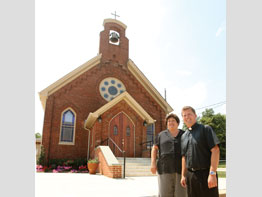 Mason work that has stood since the 19th century is enhanced by orange walls and a light blue vaulted ceiling that are set off by double crown molding.

The color scheme seems more in tune with the Outer Banks or a sleepy seaside resort, until the visitor remembers that Curtis Bay, for better or worse, has always been tied to its waterfront.

There is well-deserved excitement and satisfaction at St. Athanasius, where the restoration of a chapel that had been condemned for decades has won applause, both from grateful parishioners and Baltimore Heritage, which honored the effort with one of its 2008 Historic Preservation Awards.

A dozen institutions were recognized at a June 26 reception at the Garrett Jacobs Mansion on Mount Vernon Place. They included the nearby Baltimore School for the Arts and Mount Royal Station, but only one with a religious affiliation.

“This was a disaster, but it’s become a special place for me,” Mary Koppleman, a longtime parishioner, said as she sat in one of the chapel’s 130 chairs. “The people here are like my family. Our big church is nice, but this is more personal. My thanks go out the generous parishioners who made this possible, and Father Rob.”

Father Robert A. DiMattei Jr. arrived at St. Athanasius in 2001, along with Mary Beth Barnes, pastoral associate and director of religious education. Their initial inventory included approximately 350 families, a church built in 1958 that was designed to be a school, and a once-proud chapel.

“You could see that there was a love for the chapel,” Father DiMattei said. “People were baptized here, married here. It had deep meaning, and we had to make a decision about its future.”

“There were holes in the floor, it was a mess,” said Ed Nicoli Sr., a sacristan. “When I called the demolition man, he didn’t answer the phone. That was a good sign.”

Michael V. Murphy, the chief architect of the restoration, traced the neglect to the 1967 collapse of the church roof at nearby St. Rose of Lima.

“That roof collapse had caused the archdiocese (of Baltimore) to check into all of its older churches, and the chapel had been declared unsafe,” Mr. Murphy said. “It sat there empty, until a structural analysis found it be sound.”

Encouraged by that finding, Father DiMattei mobilized his parish in fall 2005, just as it was preparing to dedicate the new sanctuary in the main church.

“That October, we opened the doors to the old chapel,” Mrs. Barnes said. “It wasn’t safe to walk around, but our parishioners needed to see the interior, and the scope of the repair job. We were asking for $300,000, and had that in hand by January 2006.”

Asbestos abatement, a new boiler and rising construction costs increased the bill to $458,000, but parishioners came through. The actual restoration was completed in seven months, and Bishop Denis J. Madden, urban vicar, blessed and dedicated the chapel in December 2006.

On the last Thursday in spring, 7:30 a.m. Mass included dozens of worshipers, the singing of hymns and a reflection on the Lord’s Prayer by Mike Dodge, a deacon intern assigned to St. Athanasius.

Mr. Dodge went to the parish school at St. Rose of Lima in the early 1960s, when his St. Athanasius experience consisted of the occasional CYO dance in its hall. A parishioner at Our Lady of Good Counsel, Mr. Dodge’s placement by the Office of Clergy Personnel is testimony to growth that has seen the St. Athanasius roll nearly double, to 660 families.

“We’re getting generations coming back,” Mrs. Barnes said, “people who grew up here and may have moved away, to Arnold or Pasadena, or Linthicum or Glen Burnie. We’re also getting new families, who can afford a home in the surrounding communities.”

As proof, she displays a photo of the 2008 Confirmation class that numbered 30.

One of the institutions that gave Church Street its name, St. Athanasius is perched on a hill overlooking Curtis Bay, invariably described by newcomers as “gritty.”

Its shoreline on the Patapsco River was taken over long ago by smokestack industries. Many who toiled in those factories were christened in the limestone baptismal font that graces the rear of the chapel, one of the touches that earned its Historic Preservation Award.

An organ that had been in the main church was dismantled and reconstructed in the choir loft. Beneath the bell tower, morning light is reflected through a stained glass oval that had been boarded up.

The tabernacle was salvaged from another church that burned. The sanctuary lamp and candle holders came from Italy, the crucifix courtesy of Mr. Nicoli and his wife, Mary, and the Swinko sisters, Helen and Sylvia.

For many, the restoration represents a welcome home.

Don Yirka, 76, spent his youth playing for the Curtis Bay Athletic Club when it was one of Baltimore City’s athletic powerhouses. After a hitch in the U.S. Army, he bought a house on Cypress Street, and the retired machinist never strayed far.

“After the renovation, I did the first reading, and there were tears in my eyes,” Mr. Yirka said. “Young people want to get married here, because that’s what their grandparents did. The place is in demand.”