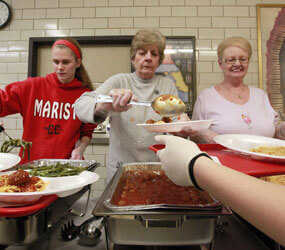 WASHINGTON – After President Barack Obama signed the Budget Control Act Aug. 2 to raise the nation’s debt ceiling, a collective sigh of tentative relief was immediately followed by plenty of speculation and analysis of what the country should do next.

Although much of the discussion relied on the opinions of economists and politicians, religious groups bypassed the usual pundits to consider how Jesus would react to the country’s financial fiasco.

And apparently he could have differing takes on ways to solve the debt crisis, according to two different Christian groups.

The Circle of Protection, a faith-based group which includes the U.S. Conference of Catholic Bishops, has been urging Washington’s lawmakers not to cut funding for programs for the poor and couches its members’ concerns with the question: “What would Jesus cut?”

Another faith-based group, Christians for a Sustainable Economy, has argued that federally run programs for the poor do not always provide the best solution and are urging the government to put more focus on financial stewardship and economic responsibility.

In a letter to President Obama, the group said the Circle of Protection doesn’t “speak for all Christians.” Its members raised their own question about the most Christian way to respond to the debt crisis, asking: “Whom would Jesus indebt?” and pointing out the “the good Samaritan did not use a government credit card.”

The arguments of both groups have merit, according to Patrick Clark, an assistant professor of theology at Jesuit-run University of Scranton, Pa. Clark posted an Aug. 8 blog entry on the opposing Christian responses to the economic crisis on http://catholicmoraltheology.com – a site which posts comments from North American Catholic moral theologians.

He called the Circle of Protection’s approach “more urgent,” though, saying public spending on poverty and global health programs is “a sliver of discretionary spending and essentially irrelevant to America’s long-term debt.”

Clark also noted that an argument in the budget talks about “shared sacrifice” focuses mainly on cuts in discretionary spending and “requires disproportionate sacrifices of the most vulnerable.”

“If religious people do not make this case,” he said, “it is difficult to determine what distinctive message they offer.”

John Carr, executive director of the U.S. bishops’ Department of Justice, Peace and Human Development, has been keen on making the case for those in need and has been disappointed with the government’s recent solutions.

In an Aug. 3 statement, the day after the president signed the debt deal, he said the budget debate “demonstrated the partisan, ideological and dysfunctional polarization that dominates Washington.”

“It wasn’t pretty, and it isn’t over. While the crisis of default was averted, for advocates of poor and vulnerable people, this debate was disappointing, ominous, and just a beginning,” he said.

The unfinished business of trimming the U.S. budget now falls on the shoulders of a super committee – a bipartisan congressional group of 12 – whose number alone has an apostolic ring to it. Members of the committee, whose names were finalized Aug. 11, have until Nov. 23 to recommend $1.5 trillion in deficit reductions during the next 10 years.

They can recommend further cuts in discretionary spending, changes to entitlement programs, including Medicare and Social Security or increases in tax revenue.

A Washington Post editorial Aug. 1 pointed out the enormous task ahead for this then-unnamed group and said it called for “the most able legislators from each party to come together and recognize that flexibility and compromise will be essential to crafting a final agreement.”

The ability to compromise and work together will certainly be key, especially since Congress’ inability to do so influenced Standard & Poor’s downgrade of the U.S. credit rating Aug. 5.

The credit ratings agency faulted the charged debt debate and inability of politicians to compromise as factors in their decision to downgrade. “The political brinkmanship of recent months highlights what we see as America’s governance and policymaking becoming less stable, less effective, and less predictable,” it said in a statement.

Jesuit Father John Kavanaugh, a professor of philosophy at St. Louis University, wrote in the Aug. 1 issue of America magazine that the economic situation is “dangerous, but it need not be fatal.”

He said compromise could still happen if House Speaker John Boehner, R-Ohio, and Obama “muster allies within their parties who will seriously address our dangerously inequitable distribution of wealth, our illusions of endless entitlements, the diminishment of the middle class, the increasing misery of the jobless and the poor, the socialism that benefits those too big to fail, and belt-tightening for those too small to care about, and the 1,000-page morass of hidden loopholes and exemptions called a tax code.”

The priest said this kind of work will take time, imagination, intellect and heart. “But most of all, it will take courage to stand up to the nasty rhetoric and nutsy intransigence that haunts our political life.”

And while the budget details are fine-tuned during the next few months, interested groups will continue to weigh in on the issue.

Sister Simone Campbell, a Sister of Social Service who is executive director of Network, a Catholic social justice lobby, said that in the upcoming weeks and months the interfaith community will be “both vigilant and active” in reminding Congress about the needs of the poor.

“We will not be silent,” she said.

Carr likewise said lobbying efforts will continue through letters, visits, and action alerts stressing a “moral responsibility to put the nation’s fiscal house in order, to reduce unsustainable deficits and future debt, and to do so in ways that protect human life and dignity, especially among ‘the least of these.’“