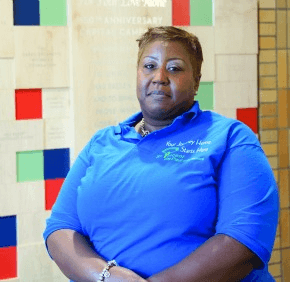 How does a family end up homeless?

“Sometimes it’s an illness or a car breaking down,” said Toni Boulware Stackhouse, senior director of Sarah’s Hope, a family shelter operated by St. Vincent de Paul of Baltimore on the city’s west side. “They lose time at work or have to spend a bunch of money, and they end up getting evicted and  being homeless.

“Sometimes it’s a complicated pregnancy, so they can’t work, and then can’t pay the rent.”

For 34-year-old Daphne, mother of two teenaged boys and a 10-year-old daughter, it wasn’t her own illness that turned her outdoors.

“I was taking care of my dad,” she said. “He was having seizures.”

His condition worsened, necessitating more care than Daphne – who requested that she be identified by first name only in this article – could provide.

“I tried to hang onto the apartment,” she said, but soon found herself and her family staying on a succession of couches, until they arrived at Sarah’s Hope, located at 1114 N. Mount St. in the city’s Sandtown-Winchester neighborhood, the scene of Freddie Gray Jr.’s final arrest and bearer of the brunt of unrest following his death.

“I felt like this was my last stop,” Daphne said, “that if I don’t get it right here, I don’t know how I’m going to get it right.”

Approximately 60 percent of the residents have a job when they arrive at Sarah’s Hope, according to Boulware Stackhouse.

Daphne had been out of the workforce for six years while caring for her father, and potential employers were skeptical. A fellow resident, however, helped her find work at a nearby Subway.

“Daphne is wonderful,” said Caroline Coffill, Daphne’s case manager and assistant director of family services at Sarah’s Hope, “a good mother and very caring person, and diligent from the day she arrived here.”

Making time for case management meetings – residents must attend one per month; most attend two – between looking for work and permanent housing, Daphne was able to obtain a birth certificate, Social Security card and Maryland ID card.

“I got all of that within the first month of being here, with all the resources,” she said. “I don’t think I would’ve been able to do it on my own.”

Connecting residents to resources  is at the heart of a case manager’s duties.

“It could be getting a job, or getting a degree, or getting public benefits that they didn’t know they were eligible for,” Coffill said.

Yolanda Proctor, a fellow case manager, said that helping residents find housing is the number-one goal. The week she was interviewed by the Catholic Review, Proctor saw four of her families leave the shelter. The next week, three were scheduled to move into permanent housing. As the Catholic Review went to press, Daphne was attempting to do the same.

Before that happens, however, Sarah’s Hope aims to make their stay productive and comfortable. In October, Mayor Stephanie Rawlings-Blake attended a grand opening at which St. Vincent de Paul of Baltimore revealed the fruits of an $8 million renovation of Sarah’s Hope which doubled its capacity from 75 to approximately 150 beds.

Confined to the first floor of its three-story former elementary school building, residents slept on cots in four classrooms and shared two bathrooms before the renovation. For privacy reasons, the shelter could not house male heads-of-household or older male adolescents.

Today, families with older male members stay on the third floor. Three bedrooms of four to seven individuals are grouped around two bathrooms.

In addition to case management meetings, residents attend on site adult enrichment classes on topics ranging from parenting to financial literacy and job readiness. Often, they draw support from each other.

“We have a lot of teens,” Daphne said, “so we have what we call ‘little therapy sessions.’ We talk about any issues they might be having.”