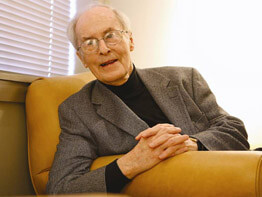 When W. Gregory Halpin retired as the administrator of the Maryland Port Administration in 1985, he had amassed quite a collection of adventures.

During his time leading the agency, he oversaw the construction of the World Trade Center in Baltimore. His work took him to far-flung corners of the world like Brussels, Tokyo, Hong Kong, Poland, Malaysia and Russia. He even entertained the brother of the last Chinese emperor.

Although he did some consulting work in other ports after retiring, the parishioner of Immaculate Conception in Towson wasn’t satisfied with his much-slowed-down schedule.

That’s when he turned to the Renaissance Institute at the College of Notre Dame of Maryland in Baltimore. The institute is an active group of seniors aged 50 and older who are interested in lifelong learning and intellectual growth. Participants lead their own courses based on their areas of expertise or interest, with topics including literature, philosophy, theology, history, t’ai chi, film, writing, painting and more.

With his hand-on background in world travel and business, Mr. Halpin has conducted history courses at the institute on Russia, Ireland and Spain. He’s also led classes on the War of the Roses, the American Revolution, the War of 1812 and the two world wars of the 20th century.

“When I joined the Renaissance Institute in 1990, it was truly a renewal for me,” said Mr. Halpin, noting that “renaissance” means “renewal.”

“My life had been very, very active before and all of a sudden that stopped,” he said. “The institute filled my life with activity.”

The average age of participants is in the upper 70s, according to Mr. Halpin, who recently turned 80.
“It’s great because you are beginning to think again and you are among people who are thinking again – among people who are interested in all kinds of things,” said Mr. Halpin, a former newscaster and editor for WCBM radio in Baltimore who taught public relations at Loyola College in Maryland, Baltimore, in the late 1940s.

“They are reading, discussing and keeping themselves mentally and socially active,” he said.
Mr. Halpin met Pat, his wife of 15 years, at the Renaissance Institute. He enjoys discussing world travels with other members of the institute, he said.

Meghan Walton contributed to this story.