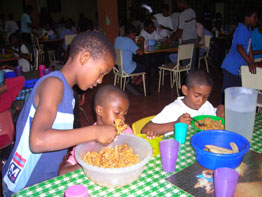 SANTO DOMINGO, Dominican Republic – Yamira Abreu emerged from her 14-bed dormitory and headed to the dining hall to share a meal, conversation and prayers with her fellow students at the Hogar Rosa Duarte orphanage for girls.

Like many of the 120 girls living at the orphanage run by the Daughters of Charity of St. Vincent de Paul, 12-year-old Yamira’s parents are alive, but the financial resources of the family forced them to place her with the sisters four years ago.

“If they have family in the area, they often go home for the weekend,” said Sister Julia Del Moral, D.C., director of the orphanage. “We try to keep that family bond.”

Children in the Dominican Republic end up in orphanages for a variety of reasons, which include the death of one or both parents, severe poverty, family drug or alcohol addiction, mental illness or abandonment by the mother or father, Sister Julia said.

Very few children in the sister’s orphanage, or the 220 boys in the neighboring Santo Domingo Boys Savio Orphanage, are adopted, and most stay at these facilities until they are 17 or 18 years old, said Angel A. Aloma, executive director of Food For The Poor, the Florida-based relief agency that provides funding, food and development projects at both homes.

“The needs are very great for us, and we don’t get enough assistance from the government to pay for all of the care these boys require,” said Father Louis Duran Duran, S.D.B., director of Santo Domingo Savio. “We rely on volunteers, on generous Catholics, programs like FFP and divine providence for the resources to make good men out of these boys.”

The boys – some of whom are restless and come to the orphanage with anger and disciplinary problems – are never left alone. They study a variety of subject matters and participate in vocational training; they are encouraged to partake in extracurricular sports and are primed to continue their education after graduating from secondary school, Father Duran Duran said.

“A large percentage of our students penetrate the workforce, some continue their studies in Jesuit schools and four have been ordained priests,” he said. “We have four former students who are now in seminary.”

Students in each facility are charged with keeping their orphanages clean, and both would be considered spotless by United States standards.

When 12-year-old Elias Rafael Madera prepares to dine with four younger students and an adult, he is in charge of serving the others at the table, because he is the oldest boy.

“I don’t mind putting the food (consisting of a chicken, rice and corn mixture, and fried bananas) on their plates,” Elias said. “It’s my job. It’s my duty. I’m proud to be the one.”