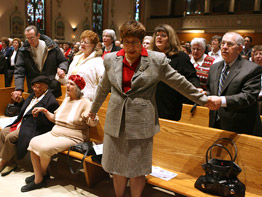 When Sister Marietta Russell, M.H.S.H., participated in the last regularly scheduled Sunday Mass at St. Martin, Jan. 27, she reflected not only on her last nine years as a parishioner and leader of a parish sewing group, she recalled that her religious order got its start in that very west Baltimore building 118 years ago.

The Mission Helpers of the Sacred Heart were founded in 1890 at St. Martin by Mary Frances Cunningham. The order taught religion to black children.
“Former slaves were migrating to Baltimore from the South, and Mary Frances Cunningham used to see the little black children on the steps of St. Martin and they would ask her to tell them stories about Jesus,” said Sister Judy Waldt, president of the religious order that now has 75 members worldwide.
“She was eventually given permission to teach them religious education, and she started that in a corner of St. Martin’s basement.”

By the beginning of the 20th century, the Mission Helpers opened an industrial school and laundry to prepare young black women for employment, launched a school for the deaf and extended ministries beyond Maryland.

The sisters boasted around 275 members during the order’s heyday of the 1950s.

Today the religious order operates ministries in pastoral work in parishes, hospitals, nursing homes, senior communities and college campuses and work throughout this country and Venezuela.

When Sister Marietta reached an age to officially retire, the Baltimore native decided to return to the roots of the religious order by starting a sewing group at St. Martin.

The children – all parishioners of the church – range in age from 5 to 16. Sister Marietta was welcomed so enthusiastically by the families she decided to make it her regular place of worship.

“I caught their spirit,” the 83-year-old nun said. “I went to that parish to give something to these people, and I have received so much more in return.”

Like so many of the St. Martin parishioners, Sister Marietta understands why the church had to close for regular Mass. She will worship and take her ministry to the new Transfiguration Catholic Community church building, located at the former St. Jerome.

“But, we’re all still sad,” she said. “We have a history in that building and a little bit of us will always be there.”