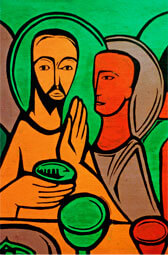 PHOENIX – When Blessed Theodore de Celles founded the Canons Regular of the Order of the Holy Cross in 1210, Christendom looked a bit different than it does today.

Members of the order – also known as Crosiers – lived a spirituality based on Christ’s suffering on the cross and his redemptive death and formed communities to pray and provide pastoral ministry.

Surviving the Reformation, a multitude of wars and even the suppression of their order, Crosiers have managed to adapt to their surroundings and the pressing needs of the times.

That should all come in handy, because the Crosiers are in the middle of another big change.

“What happened in the past couple of decades is there’s been a great renewal in religious life across the church and that’s been true in our order as well,” Crosier Father David Donnay said. “We’ve basically been asking ourselves the question ‘What is our gift for the church?’“

In asking themselves that question, the Crosiers in America – long based in Onamia, Minn. – adopted a plan called “Vision 2010,” which laid out a set of goals for the order to reach by their 800th anniversary.

One of those goals was to rethink the physical location of the order. With only about 70 Crosier brothers and priests nationwide, the order decided to consolidate its members into two communities, allowing for a more vibrant and fruitful communal life.

One of the groups remained in Onamia, but many – including the order’s provincial – moved to Phoenix, where the Crosiers’ day-to-day business is now run.

Crosier Father Thomas Carkhuff, prior-provincial of the order, said the real significance of the move is the boon it can give to the group’s religious life.

“Two of the basic commands of the Gospel are to love God and love your brothers and sisters,” Father Carkhuff told The Catholic Sun, newspaper of the Phoenix Diocese. “That’s really at the heart of our life together.”

He described the Crosier charism as threefold. First, Crosiers must live the Christian life together. They also must have a vibrant prayer life together. Third, they must provide outreach and ministry to others outside the community.

Historically, the outreach for the order has been to staff parishes, celebrating Mass and hearing confessions where there might not be enough priests.

Crosiers will continue to fulfill that role, Father Carkhuff said, but the order hopes to emphasize the community life a bit more.

“There’s been a period of time when the outreach portion was the greatest priority and the other two dimensions of our life became weakened,” he said.

“The real challenge is that we don’t have any one ministerial endeavor,” he said. Oftentimes, Crosiers get mistaken for parish priests, and the demands of the parish can shortchange the way of life so important to the order.

That way of life includes praying together morning, midday, evening and night, celebrating a daily Mass and gathering for weekly or monthly chapters, where priory business is discussed.

“The spirituality for us is that we see this life as the way that we encounter or go to the experience of God,” said Crosier Father Steve Henrich, prior of the Phoenix community.

“It’s in the actual living together and attempting to share our lives with each other that we have the experience of the divine – though not always,” he said with a laugh. “It’s a goal.”

Father Henrich leads the 20 or so Crosiers living in Phoenix. Right now, the community is split between two locations in the area because of space issues, but he’s hopeful that won’t be the case for long.

When the Crosiers decided to move their provincial headquarters to Phoenix, they knew that they would eventually need a new campus that could house the religious, provide a chapel for prayer and Mass, and hold offices for the order’s leadership.

To that end, the order purchased some property in south Phoenix. They are in the process of raising funds for the building.

“It’s a statement of what we believe in and how we want to strengthen and deepen our Crosier connection here,” Father Carkhuff said of the plans. “It says we believe in the importance of what the church is doing here and that we have something to add by our way of life.”

The property – or “little village” as Father Donnay called it – would provide housing for lay seniors.

“There’s a need for independent senior housing,” Father Donnay said. “People, especially seniors, long to have a community and there would be a different focus to this community. It would be based on Crosier spirituality and what we offer.”

He said there also could be some ministerial opportunities in having seniors live at the site, and the community could potentially provide some sort of hospice care.

“We are in the process of shaping our future,” Father Henrich said. “We have some dreams and hopes and we’re as confident as we can be that things are going to gel.”