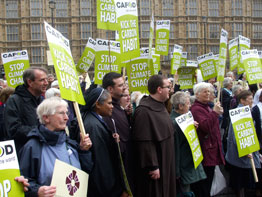 The group assembled outside Parliament April 23 before expressing its concerns to politicians, including Hilary Benn, secretary of state for the environment and rural affairs.

The demonstrators held up banners bearing the slogans “Kick the Carbon Habit” and “Stop Climate Chaos.”

Among the organizers of the event were the English and Welsh bishops’ Catholic Agency for Overseas Development and the Conference of Religious.

Demonstrators hoped to persuade the government to agree to amendments to the Climate Change Bill that is passing through Parliament and is scheduled to become law later this year.

They want the carbon-emissions-reduction target to be increased from at least 60 percent to at least 80 percent by 2050. They also want the United Kingdom’s share of emissions from aviation and shipping to be included in the reduction.

The demonstrators included Benedictine Abbot Christopher Jamison of Worth Abbey, near London.

“God made the world for us to care for, and he also intended for it to be something to share justly, for everybody,” he told Catholic News Service at the rally.

“We have two religious duties that we are expressing here today,” he said. “Firstly, to make sure the world is cared for because it is God’s world.

“Secondly, the world’s poorest are the worst-affected by climate change, and so in justice we must make sure that climate change does not make the poor even poorer,” he said.

“It is easier to characterize this as stopping progress, but what we are here to do is to encourage our government to develop new ways and find new technologies so that the world’s development can continue and continue fairly,” he added.

The event was also attended by Irish Columban Father Sean McDonagh, who has campaigned on environmental issues for about 30 years.

Father McDonagh, author of the 2006 book “Climate Change: The Challenge to All of Us,” told CNS that small increases in global temperatures might result in “catastrophic” harm to the planet and that it was important that the church was at the forefront of the environmental movement.

Besides setting targets to reduce carbon dioxide emissions, the bill will establish an independent body – the Carbon Committee – to work with the government to reduce emissions over time and across all sectors of the British economy. It will create powers to enforce new emissions-reduction measures and set out new monitoring and reporting arrangements.

A statement issued by CAFOD April 23 said that the U.N. Development Program recognized that the targets in the bill “were not ambitious enough.”

About 150,000 people – almost all from developing countries – die each year from the effects of climate change, said the statement.

Chris Bain, director of CAFOD, said: “Tackling climate change is essential if the government’s good work in fighting poverty is not to be undermined by rising global temperatures, which hit the world’s poor hardest.

“We desperately need to see a strong bill going through Parliament, which shows the U.K. is taking tough action on climate change and gives the government a mandate to speak out at crucial international talks,” he said in the statement.