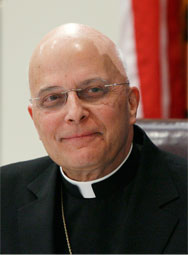 WASHINGTON – Two U.S. cardinals are part of an interfaith group of religious leaders who have asked President George W. Bush for his “active leadership” in achieving a peace agreement between Israel and the Palestinian territories, and for a comprehensive cease-fire covering Israel, the Gaza Strip and the West Bank.

“The split in Palestinian governance between the West Bank and Gaza is incompatible with a durable peace agreement,” said the letter, which was signed by Cardinal Francis E. George of Chicago, president of the U.S. bishops, and Cardinal Theodore E. McCarrick, retired archbishop of Washington.

The United States should “quietly support efforts by others, possibly including Egypt and Saudi Arabia, to help form a new unified Palestinian government … committed to rejecting violence, accepting previous agreements, and negotiating a two-state solution as the basis for peaceful coexistence between Israel and Palestine,” said the Jan. 30 letter, written for the National Interreligious Leadership Initiative for Peace in the Middle East.

A copy of the letter was released Feb. 4 by the Office of Media Relations of the U.S. Conference of Catholic Bishops.

“Determined leadership by Secretary (of State Condoleezza) Rice and yourself in the coming months will be essential for peace negotiations to succeed,” the religious leaders told Bush. They also offered to have a delegation from their group meet with him.

The letter called for “meaningful reciprocal, simultaneous steps” by Israel and the Palestinian Authority, including a cease-fire, to improve the conditions for peace. Those steps also include:

“Effective public monitoring of international aid and of implementation of these reciprocal steps is essential to hold the parties accountable to their commitments,” they said.

An Israel-imposed blockade along the Gaza Strip in January created hardship for Palestinians living there. Eventually, a border wall between Gaza and Egypt was breached multiple times, with Palestinians streaming out of Gaza to buy food and other necessities.

“Our nation has an inescapable responsibility and an indispensable role to play in achieving peace and … achieving Arab-Israeli-Palestinian peace will have very important positive reverberations in the region and worldwide,” the letter said.

The National Interreligious Leadership Initiative for Peace in the Middle East represents more than 30 Jewish, Christian and Muslim religious leaders, including the heads of 25 national organizations.