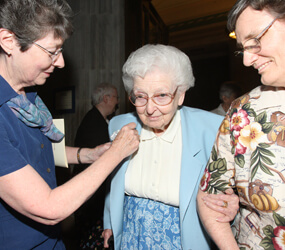 At the conclusion of Mass May 23, Archbishop Edwin F. O’Brien looked out into the first few pews of the Cathedral of Mary Our Queen, Homeland, and observed 46 clergy and religious celebrating milestone jubilees.

“All I can say is that thousands and thousands of people would like to be standing where I am now, to say thank you to these wonderful religious for all they’ve done for so many of us, including myself, over the years,” the archbishop said.

He quickly found he was not alone. In the remaining pews of the cathedral, hundreds of people enthusiastically applauded.

It was a joyous night for the Archdiocese of Baltimore, as some of those celebrating their 25th, 50th, 60th and 70th years of service were honored at the Jubilee Celebration for Religious Celebrating Anniversary Years of Consecrated Life.

The archbishop said in his homily their lives were “hope to persevere in God’s grace in good times and in bad, in sickness and in health until death.”

He added: “Absolutely incalculable is the debt of gratitude the people of God owe you. You and other jubilarians unable to be here have a total surpassing 8,000 years of service in virtually every apostolate in our archdiocese.”

Following Mass, the jubilarians joined the archbishop in the parish hall for dinner. Many talked about their work in hospitals, prisons, schools, neighborhoods, churches and foreign lands.

“These are the people who built the entire infrastructure of the Catholic Church in the United States for generations,” Sister Constance said. “That is to be celebrated.”

Sister of Notre Dame de Namur Katherine Corr, a member of the Chesapeake Province, has been helping oversee a program of 326 volunteers at AmeriCorps for several years.

Celebrating her 50th year, the 67-year-old sister said she felt an urgency to perfect her mission.

“I have less time to accomplish what I want to accomplish,” Sister Katherine said. “There’s so much I want to see happen in our church and in our world. It’s a joy to be living this life. It’s a true call and you can see the ripple effect that you have.”

Since he arrived in the archdiocese, Archbishop O’Brien has made vocations a priority. Sister Constance said the jubilarians are role models for future generations.

“I wish more young women and young men would look at it seriously,” Sister Constance said. “It’s a very fulfilling life, and it’s a wonderful opportunity to relate to people in so many different ways. When I hear the vows, it always comes back to. … I wouldn’t change a thing.”