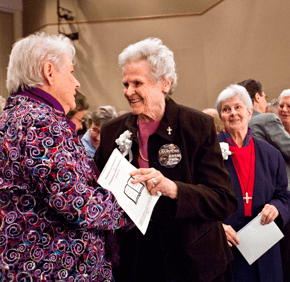 TOWSON – During her senior year at The Catholic High School of Baltimore, Angela DeFontes heard herself say she wanted to be a Sister of St. Francis.

“I know that I never planned to say that,” said the Sister of St. Francis of Philadelphia, now 71. “I was a normal high school girl dating and involved in different activities. I truly believe it was the Holy Spirit at that moment prompting me to say this is really what God wants me to do.”

A religious sister for 50 years, Sister Angela is the director of religious education at St. Stephen, Bradshaw.

“My life has been a response to God’s grace,” she said. “I couldn’t have done this without God’s grace. I want to celebrate that in Thanksgiving.”

Sister Angela was one of 78 priests, brothers and sisters in the Archdiocese of Baltimore celebrating jubilees this year.

Twenty-eight were recognized at a Feb. 2 World Day for Consecrated Life and jubilee celebration Mass at Calvert Hall College High School, according to Mission Helper of the Sacred Heart Sister Maria Luz Ortiz, the archbishop’s delegate for religious in the archdiocesan Office of Consecrated Life. The clergy and religious present renewed their vows.

This year’s other 50 jubilarians could not attend, either because they were infirm or priests busy hearing confessions and celebrating Masses, Sister Maria said. Nearly 200 religious attended the Mass.

To view a photo slideshow of the event, navigate the arrows below.

During his homily Archbishop William E. Lori, the principal celebrant, mentioned the religious’ vows to live in chastity, poverty and obedience.

“You know … how challenging it is to live this vocation,” Archbishop Lori said. “You bear witness to his (God’s) love in an amazing form of ministries.”

Archbishop Lori said his role was to “express the deepest thanks and prayerful appreciation” to the religious and “thank and congratulate our jubilarians.”

He also prayed for an increase in vocations.

Father Knapp, a concelebrant at the Mass, was 14 when he first considered entering the priesthood.

“It’s a wonderful life once you make a decision for it,” said Father Knapp, 63. “It’s exciting to be a part of the mission of Jesus Christ and that’s spreading his kingdom.”

Bon Secours Sister Elaine Davia, who will celebrate her 50th jubilee in 2014, described being with the nearly 200 other religious at the Mass as “powerful.”

“There’s a lot of energy in this group of women and men,” Sister Elaine said. “It’s the power of unity.”