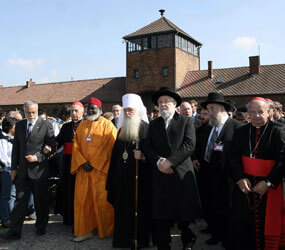 KRAKOW, Poland – Religious faith and dialogue can lead humanity away from the abyss of war, hatred and fear and point to the path to peace, said leaders representing Christianity, Judaism, Islam, Buddhism and other religions around the world at a congress in Poland.

“Religions don’t want war and don’t want to be used” as an excuse for or to justify war, the leaders said in a final written statement released Sept. 8.

To say a war is waged in the name of God is blasphemy and “humanity will always be defeated by hatred and terror” when it turns to war to solve its problems, it said.

The statement and appeal for peace came during the final ceremony of the Sept. 6-8 international congress in Krakow, which was dedicated to “Faiths and Cultures in Dialogue.”

Some 300 leaders representing the world’s major religions took part in the gathering, which was organized by Krakow’s archbishop, Cardinal Stanislaw Dziwisz, and the Rome-based Community of Sant’Egidio.

The congress focused on the 70th anniversary of the start of World War II and reflected on the horrors of war with a pilgrimage to the former concentration camp of Auschwitz-Birkenau. The encounter also paid tribute to the interreligious efforts of Pope John Paul II, who was the archbishop of Krakow before his election as pope.

“The bitter lesson of the Second World War is often forgotten and yet it was a huge tragedy in human history” that showed to what horrendous depths humanity could sink, said the meeting’s final statement.

The world today needs spiritual guidance as it is disoriented by the current economic crisis and “an often soulless, faceless globalization,” it said.

God is the source of peace in the world and spirituality and dialogue will point the way to a life and a world of peace, it said. Without dialogue, the world “will be a slave to hatred and fear,” it added.

In a long-distance greeting via satellite linkup, Pope Benedict XVI told the interreligious leaders that the world’s religions in particular have a duty to fight against violence and extremism.

Religions must promote forgiveness and reconciliation, he said from the Italian city of Viterbo Sept. 6. The key to future peace is the ability to transmit to younger generations a culture and style of life that is marked by love, solidarity and respect for others, he said.

Joshua DuBois, special assistant to U.S. President Barack Obama and head of the White House Office of Faith-Based and Neighborhood Partnerships, was one of a handful of speakers during the closing ceremonies.

He cited several excerpts from Obama’s June 4 speech in Cairo, Egypt, including this statement: “The people of the world can live together in peace. We know that is God’s vision. Now that must be our work here on earth.”