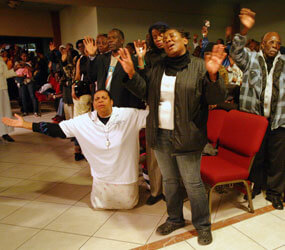 MIAMI – Martine Jeudi held photos of her aunt and other relatives in her hand at a Miami church Jan. 13 as she prayed for victims of the magnitude 7 earthquake that struck Haiti Jan. 12 and devastated areas of Port-au-Prince, the capital.

“My aunt was killed,” said Jeudi, 36, who came from Hollywood to attend a memorial prayer service at Notre Dame D’Haiti Church. “My other relatives are missing. The building (where they lived) was destroyed.”

She was one of hundreds of Haitian-Americans whose relatives were killed or missing in Haiti.

“Nobody foresaw this,” he said in impassioned remarks at the service. “God and nature surprised us. God reminded us that something must be done. Haiti needs more than food and water. We need substantial change in Haiti.”

Father Jean-Mary told the congregation to make a commitment to what is the poorest country in the Western Hemisphere.

“I don’t want you to come to church and cry,” he said. “I want you to make a commitment so that Haiti can stand on its feet. Today, many of you are wondering where your loved ones are in Haiti. But, how many times did you contact them? You know how hard life is in Haiti.”

Father Jean-Mary said that the death of their fellow brothers and sisters was not a defeat.

“The light of God will continue to shine on Haiti,” he said. “We are here to show our solidarity and our commitment to Haiti. We are here to be a light in the darkness.”

The emotional aftershocks of the quake were being felt by south Florida’s large community of Haitian immigrants, who anxiously waited to hear about the fate of loved ones.

Marie Claire Kernizan was talking to her husband in Port-au-Prince when the earthquake hit.

“He told me, ‘Oh, oh, oh, oh,’ and after that, no communication,” said the secretary at St. Mary Cathedral School in Miami.

Seven hours later, she managed to speak with him for about three minutes on his cell phone, before communications were cut off again.

“It’s a miracle,” said Kernizan, who unlike many others in south Florida, knew her husband was all right even though their house was “a little bit damaged.”

But “I haven’t heard from my mother and my brother who live in Petionville,” Kernizan added. Petionville is a suburb built on the hills above the Haitian capital.

At St. Mary Cathedral School, most of the 380 students in pre-kindergarten through eighth grade are of Haitian descent. They gathered for Mass Jan. 13 to pray for strength, to pray for their loved ones, and to pray for those who will be helping with rescue and relief efforts.

“Almost every child has relatives over there,” said Sister Jane Stoecker, a Sister of St. Joseph and the school’s principal. “It’s been very sad. They can’t reach them.”

Using language they could understand, he told the schoolchildren that “nature sometimes brings earthquakes” and if the earthquake is really big “the walls cannot stand up” and people are hurt or killed.

“Many of your relatives, many of your friends are going to suffer greatly,” Monsignor Hogan said. But he reminded the children that no matter what happens here on earth, “Jesus is right here in our midst. He is our hope and he is our salvation.”

He urged them to do two things: Pray for the victims and their rescuers, and “be very generous” when donations are called for. “Whatever it is you have to give, whether it’s a little bit of money or a jacket, be ready to do that.”

Speaking after Mass, Monsignor Hogan told the Florida Catholic, Miami’s archdiocesan newspaper, that he had no doubt Miami’s Haitian community would come together to help the earthquake victims.

“They’re very willing to help one another. That’s one of the beautiful things about the Haitian community,” he said.

He added that he could see, in the faces of the older children, “that they were concerned. They’re wondering about their relatives. They don’t know what’s happening.”