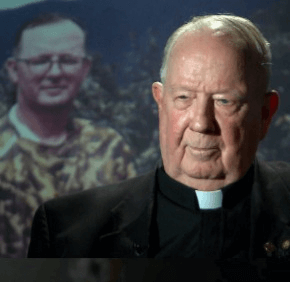 By Paul McMullen pmcmullen@CatholicReview.org Twitter: @ReviewMcMullen
Forty-five years after he served as a U.S. Army chaplain in Vietnam, Redemptorist Father John Bauer continues to expand his admiration for the resourcefulness and resolve of the men and women who were under his pastoral care during wartime.

Father Bauer, now on the staff of his childhood parish in Highlandtown, is among a half-dozen Catholics featured in “Maryland Vietnam War Stories,” a 3-hour documentary airing over as many nights, May 24-26, on Maryland Public Television.

Father Bauer was among the participants who attended a recent advance screening, where a fellow veteran noticed his clerical collar and approached him during a break.

“A total stranger,” he related, “came up and said, ‘Let me tell you a story.’ He shared that when he was without a rosary, he would pray it using the 5 holes on each side of his M-16. “MPT interviewed hundreds of veterans for this series. I told them I was not a hero.”

Father Bauer’s record of service would argue otherwise.
Raised on South Highland Avenue, Father Bauer attended the parish school at Sacred Heart of Jesus Parish, now the bilingual parish of Sacred Heart of Jesus-Sagrado Corazón de Jesus. The 88-year-old priest will celebrate the 60th anniversary of his ordination at its 10 a.m. Mass June 12.
Redemptorist Father John Bauer is shown in an undated photo celebrating Mass in Vietnam. (Courtesy Maryland Public Television)
Father Bauer was 42 and doing mission work in the Dominican Republic when, in response to an escalation of American forces in Vietnam, he volunteered to be an Army chaplain. After completing chaplain school at Fort Hamilton in Brooklyn, N.Y., and then basic training in Fort Dix, near Trenton, N.J., he was sent to Vietnam.
He celebrated Mass and brought the sacraments to the 4th Division in the central highlands, and then the 196th Light Infantry. Father Bauer traveled by jeep and was helicoptered in to even hotter zones.
He celebrated Easter Mass in 1970 “in the jungle, on my haunches, with the guys sitting around me.”
Father Bauer’s altar that day was an ammunition box. His Mass kit was lined with sponge to protect his chalice and paten; he removed the sponge and stuffed the kit with missalets and rosaries, “because the boys liked to wear them.”
He does not romanticize war. One of his helicopter pilots was among the more than 58,000 American casualties of the Vietnam War. He served Mass at Fire support base Mary Ann, where “32 of our guys” were killed in a March 1971 attack.

Father Bauer will attend a tribute at the State Fairgrounds in Timonium June 18-19, where, he said, empty white chairs will symbolize the Marylanders who died in Vietnam.
His fellow Army chaplains included a New Yorker who would become archbishop of Baltimore, Cardinal Edwin F. O’Brien. The two rarely talked about their military service, however, as then-Archbishop O’Brien took in Yankees’ games with Father Bauer, still the Catholic chaplain for the Baltimore Orioles.
Wayne “Mac” McNeir and Alan Philips are among the Archdiocese of Baltimore parishioners interviewed for the MPT documentary.
Phillips, a retired U.S. Army Colonel, is a Vermont native who retired a decade ago to Frederick, where his family are members of Holy Family Community, the military chapel at Fort Detrick.

Commissioned from West Point in 1959, he spent 30 years as an infantry officer, including two tours in Vietnam.

“I have been a company commander in combat and lost many wounded and killed in action,” Phillips told the Catholic Review in an email. “After a battle it was routine for two chaplains, one Protestant, one Catholic, to come to the unit as soon as possible. The Protestants would man the lines while the RCs (Catholics) would have a brief service, then vise versa. Chaplains were a valuable part of the fighting force. They carried no weapons, dug their own foxholes, and ministered to the dying and wounded, all while exposed to enemy fire.”

Born and raised in South Baltimore, McNeir retired from the Marine Corps as a Master Sergeant. His Vietnam duty included two 13-month tours, in 1963-64 as a radio operator, and in 1967-68 as an aviation electronics technician and defense platoon sergeant.

Baptized at the former St. Joseph Parish on Lee Street, his retirement has included serving his current parish, St. Jane Frances de Chantal in Pasadena, and the Basilica of the National Shrine of the Assumption of the Blessed Virgin Mary in Baltimore as a docent.
In between, he assisted military chaplains.
“While I am not the most pious person one is likely to meet,” he told the Catholic Review in an email, “I have always had a deep, abiding faith in God. Serving in Vietnam reinforced my dependence on a superior being, which probably afforded a greater degree of inner-peace than I would have otherwise had.”
“Maryland Vietnam War Stories” will air on Maryland Public Television May 24-26, at 8 p.m. each night.

Father Bauer, Orioles’ chaplain, goes to bat for God and the O’s