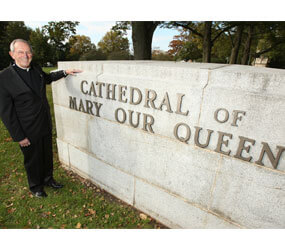 When Archbishop Edwin F. O’Brien referred to the rector of the Cathedral of Mary Our Queen as “the indomitable, irrepressible Monsignor Robert Armstrong,” hundreds of parishioners interrupted the archbishop’s Nov. 15 cathedral homily with applause.

The tidal wave of goodwill soon swelled until the entire congregation was on its feet, giving the longtime pastor a standing ovation that lasted several minutes. For many, it seemed an appropriate exclamation mark as the parish celebrated the 50th anniversary of the cathedral – a Homeland institution Monsignor Armstrong has led for a quarter century.

“I was embarrassed,” said Monsignor Armstrong, smiling as he remembered the special moment. “I never expected that. It kept going on and on.”

Monsignor Armstrong, 74, is retiring at the end of 2009, after 47 years in the priesthood. He had hoped to remain rector until the 50th anniversary of his priesthood, but health problems are forcing him to alter his plan.

The priest suffers from cardiovascular disease and is prone to blood clots. He also has the beginning stages of emphysema.

“My doctor told me I can’t go on keeping the schedule I keep at the cathedral,” Monsignor Armstrong said. “There is a lot of stress involved with the enormous administrative responsibility of being a rector.”

In addition to being a parish that serves 1,620 registered families, the cathedral is also the site of major archdiocesan and civic events.

During his tenure, Monsignor Armstrong oversaw many capital projects including ongoing repairs, the restoration of the organs and the erection of a parish center. The parish is now dealing with a leaky roof.

“There’s not a day that work orders don’t come in,” Monsignor Armstrong said. “I’ve learned all kinds of things about engineering.”

Born in Pennsylvania and raised in New Jersey and Baltimore, Monsignor Armstrong spent three years in the Augustinian novitiate before deciding to become a diocesan priest.

After Monsignor Armstrong studied at Mount St. Mary’s Seminary in Emmitsburg, Cardinal Lawrence Shehan ordained him to the priesthood in 1962 inside the cathedral the priest would one day lead.

Monsignor Armstrong taught religion at Seton High School in Baltimore and was the chaplain of the Maryland Training School for Boys. He was an associate pastor of Immaculate Heart of Mary in Baynesville and served as associate director and director of the archdiocesan Office of the Confraternity of Christian Doctrine.

In the late 1970s, Monsignor Armstrong assisted at the South Baltimore parishes of Holy Cross; St. Mary, Star of the Sea and Our Lady of Good Counsel, and was the master of ceremonies for Cardinal Shehan and Auxiliary Bishop T. Austin Murphy.

The priest was named pastor of St. Michael in Overlea in 1978 and rector of the cathedral in 1984.

Monsignor Armstrong said he loved each of his assignments. He especially enjoyed celebrating Mass and being present with parishioners for special moments.

One of the highlights of his priesthood was standing side-by-side with Pope John Paul II when the pontiff led an ecumenical prayer service at the cathedral in 1995.

In his retirement, Monsignor Armstrong will live at Mercy Ridge Retirement Community in Timonium. He expects to help out in parishes throughout the region.