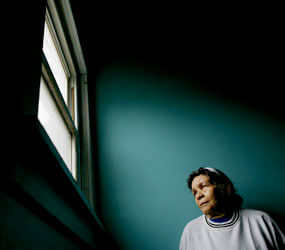 WASHINGTON – Come March 26 Jaime Silahua and his family are facing life on the streets. His bank, it turns out, is foreclosing on his home in Antioch, Calif.

It didn’t matter, Mr. Silahua said, that he tried to renegotiate the terms of his loan, citing economic hardship brought on by his teenage son’s yearlong treatment for leukemia. The bank turned down his appeal, saying his income fell just below the amount needed to qualify as a hardship case.

Mr. Silahua, who supports his family by working as a handyman in the community 35 miles east of Oakland, isn’t sure yet where he, his wife and three children will be come March 27. But he has pursued lots of options, including making a 3,000-mile bus trip to Washington as a “recovery rider” to take his story to Congress.

The trip came courtesy of the “Recovery Express” caravan, which pulled into Washington March 10 for a rally and meetings with members of Congress and White House staffers.

Put together by the People Improving Communities Through Organizing Network, the four-day caravan pulled out of Antioch March 6 and stopped in Denver; Kansas City, Mo.; Springfield, Ill.; Chicago; Flint, Mich.; and Camden, N.J., on a whirlwind cross-country trek. At churches along the way more people joined the caravan.

“We’re asking the people to pray for us,” he added, “and pray for the nation to solve this crisis.”

Mr. Silahua also was representing the Contra Costa Interfaith Supporting Communities Organization, a PICO-affiliated group of churches working to address social justice concerns. He brought his wife, Elena, and their children, Erick, 15, Aimee, 6, and Kimberly, 2, to plead their case.

Mr. Silahua said he was not trying to get out from under an overwhelming loan, but that the family fell behind in making their house payments when Erick was diagnosed with leukemia in 2007. “I wanted to be with him as much as I could,” Silahua said.

With Erick in remission last fall, Mr. Silahua sought a hardship modification of his loan, but was denied by the bank holding the mortgage because his income fell slightly short of what was needed to qualify. In February the family received notice to move out by March 26.

“That gave me energy to come on the ‘Recovery Express,’ ” Mr. Silahua said.

Members of Holy Rosary Church in Antioch, the Silahuas are not alone in facing the prospect of losing their home.

In front of the Capitol, an estimated 300 supporters rallied and called on the U.S. Senate to pass the Helping Families Save Their Homes in Bankruptcy Act. It would enact changes in the bankruptcy code that would benefit an often forgotten group of homeowners: those who faithfully make monthly mortgage payments and then suddenly fall behind for a variety of unforeseen reasons.

It’s not that these homeowners want to give up their homes; they say they want to renegotiate the terms of their mortgages, but often are rebuffed by their lender.

The legislative reforms they are seeking call for allowing responsible homeowners who fall behind in their payments to approach a bankruptcy judge who could modify loan provisions if a bank refuses to do so.

Several speakers during the 45-minute rally told stories of how they, other family members or friends were faced with losing their homes despite efforts to renegotiate the terms of their loan agreements or changes in lender policies.

Amid a backdrop of signs that read “Stop preventable foreclosures,” Andrew Moreno told how his father, a Vietnam War veteran, is facing eviction because of the onset of diabetes that forced him to retire early, making it impossible for him to continue making his full monthly house payment.

Holding his father’s Veterans Affairs identification card, Moreno said his father deserved better treatment from his lender. He said he planned to press Congress for a change in the law so others would not be forced into the same predicament his father faces.

The Rev. Lucy Kolin, pastor of Resurrection Lutheran Church in Oakland, is feeling the effects of the foreclosure problem herself because her daughter and her family were forced to move into the church parsonage after the owner of the house they were renting came under a foreclosure action. On top of that, her daughter recently was laid off from her job at a lending institution.

“We’re not here to ask for pity,” Rev. Kolin said. “We’re here for justice. It is what we have a right to expect from this country.”

After the morning rally, representatives of the group were scheduled to meet with White House staff members to discuss strategy on how to approach Congress to get the reform passed. Others were planning to take their stories to Capitol Hill in meetings with members of Congress.