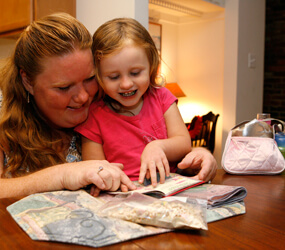 WOODBRIDGE, Va. – In a time of recession, Sondra knows she and her 4-year-old daughter Hope could be on the street.

Forced to flee an abusive relationship with her husband, Sondra, 45, who asked that her last name not be used, had nowhere to turn. Her time at the emergency shelter was limited. While Sondra had a job as a custodian at a local church, there was no way she could afford an apartment. There was no chance of moving back home, even if she and her husband could reconcile; their home had gone into foreclosure.

Enter St. Margaret of Cortona Transitional Residences in Woodbridge, Va. It’s where Sondra and Hope now have a home.

It’s a peaceful, cozy and, most importantly, safe place where they can enjoy dinner every evening. It’s where they can read and play and learn together.

For Sondra, the new home is a godsend, far better than her old life – the one that revolved around smoking crack and binge drinking mixed with beatings by her husband.

A program of Catholic Charities of the Diocese of Arlington, Va., the residence brings stability to nine single mothers and their children, most of whom have escaped domestic violence. The only transitional housing setting of its kind in the Arlington Diocese, the program helps women build self-sufficient lives.

Services such as financial education classes, employment counseling and help with transportation and child care are some of the advantages for residents.

Sondra and Hope are among thousands of people who have turned to local Catholic Charities agencies for housing services when they had nowhere else to go during the current recession.

The need for housing services like the St. Margaret of Cortona program as well as emergency shelter and permanent housing jumped 12.4 percent in 2008 as the economic recession gained momentum, reported Catholic Charities USA in its 2008 annual survey of services.

Released Sept. 15 during a nationwide teleconference from the agency’s Alexandria headquarters, the report shows that Catholic Charities agencies served nearly 600,000 people in need of some type of housing assistance in 2008.

Without being able to offer specifics, Father Larry Snyder, president and CEO of Catholic Charities USA, said the demand for housing and other social services continued to climb as the recession deepened during 2009.

“We can only conjecture that when we get the figures for 2009 it’s going to be much, much greater,” he said.

Father Snyder also said the recession is causing local Catholic Charities agencies to struggle with “many of the same challenges as our clients.” Cuts in government funding for social services coupled with significant losses in donations of cash and goods are causing local agencies to scale back services, reduce hours of operation, lay off staff, freeze wages and implement workdays without pay, he said.

Overall, Catholic Charities agencies had revenues of more than $3.9 billion in 2008. Two-thirds of the revenue came from local, state and federal government sources.

Despite the challenges posed by the recession, Father Snyder expressed optimism that the agency will be able to make strides in its nearly 3-year-old campaign to reduce poverty by 50 percent by 2020.

“I actually think (the recession) gives us a greater opportunity to do that because when you look at the challenges that we have right now, one thing that should be very clear is that we can’t just meet those challenges with what we were doing before,” Father Snyder explained.

“Things have gotten so desperate it gives us the opportunity to really look at a solution that doesn’t depend on. . . The social structures we had before, but to really redefine how we do it,” he said.

A breakdown of the 8.5 million clients shows nearly half – 48 percent – were adults 18 to 64 years old, 29 percent were children and 13 percent were seniors. Ten percent were unknown.

Prepared by the Center for Applied Research in the Apostolate at Georgetown University, the survey revealed: