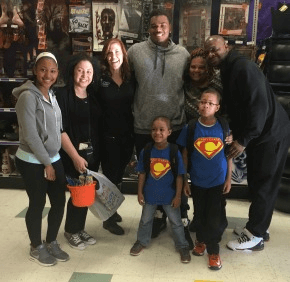 By Maureen Cromer
mcromer@CatholicReview.org
OWINGS MILLS – When people first take a look at Ronnie Stanley, all they see is a 6-foot-6-inch, 320-pound offensive tackle for the Baltimore Ravens. What they don’t see, however, is the heart of gold under his No. 79 jersey.
Stanley came to Baltimore with a preparation that included Catholic schooling. He attended Bishop Gorman High School in Las Vegas, before committing to the University of Notre Dame in 2011. After playing both left and right tackle for the Fighting Irish, Stanley entered the 2016 NFL draft where the Ravens selected him with the sixth overall pick.
In Baltimore, Stanley settled in at the left tackle position and has given of his time to the Casey Cares Foundation, which was founded by Casey Baynes, a parishioner of Our Lady of Perpetual Help in Ellicott City. According to its website, the foundation “provides uplifting programs with a special touch to critically ill children and their families in the Mid-Atlantic region.”

“I was brought up to help people however I could,” Stanley said. “My parents taught us to be good people and help others whenever we had the opportunity.”
Earlier this fall, Stanley took two children from the Casey Cares Foundation, Noah and Kevrik, on a Halloween shopping spree.
“Kevric is 7 years old and is battling leukemia,” said Casey Cares communication director, Amy Rosewater. “His mother also has cancer and an electrical fire nearly destroyed his family’s home Sept. 30, so having a visit from an NFL player was a much-needed boost for him and his parents!”
“The other child is Noah,” Rosewater continued. “He is also 7 and diagnosed with leukemia. They are both sweet kids and love saying that ‘Big Ronnie’ is now their ‘friend.’”
“We had a great time,” Stanley said of the shopping excursion. “The boys and I, we tried to just ignore the cameras, let loose and have some fun.”
After the shopping spree, Stanley met with the boys and their families to gift them tickets to the Nov. 6 Ravens game against the Steelers, which Baltimore won 21-14.
The Ravens, who sit atop the AFC Conference North Division with a 6-5 record, are home Dec. 4 against the Miami Dolphins. Baltimore went 0-4 as Stanley missed four games with a foot injury. His return has coincided with a 3-1 run.